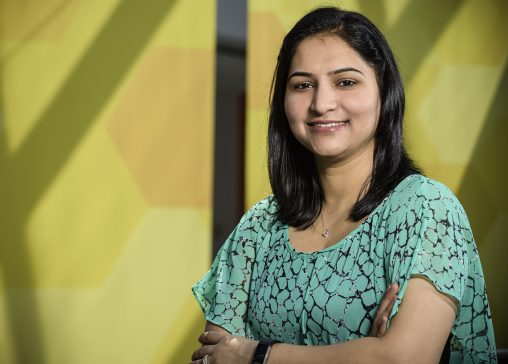 Dhanashri Desai, who graduated from Wright State in May with a master’s degree in mechanical engineering, returned to her native India for a valuable internship. (Photo by Erin Pence)

It was familiar and foreign at the same time. Dhanashri R. Desai, Wright State University engineering alumna, was returning to her native India on an internship, but it was to work on a project all new to her.

The four-month internship, which began in 2018, was at Ingersoll Rand, a $13.5 billion corporation that produces industrial and commercial products worldwide. The company’s family of brands includes Club Car, Ingersoll Rand, Thermo King and Trane. Part of Ingersoll Rand’s business is providing refrigeration units for commercial and residential use as well as for motor vehicles. As part of that, the company makes compressors and impellers, the rotating component of a centrifugal pump.

“It was a pretty good opportunity, but it was going out of my comfort zone,” said Desai. “This particular area was very new for me. It was very challenging.”

Desai’s job was to work on the SAFE approach to structurally qualify the impeller of a centrifugal compressor and develop a user interface for the same using an Excel computer software program called Visual Basic for Applications.

“They were very happy with my work,” she said.

Desai said she was impressed with the work culture at Ingersoll Rand.

“The company respects talent, considers every employee important and understands the importance of work-life balance,” she said. “It was exciting to go to work every day.”

Desai grew up in the Indian state of Maharashtra in west-central India best known for its fast-paced capital, Mumbai. Her family owns and operates a farm in Maharashtra.

Desai’s uncle is a mechanical engineer and she would have conversations with him about his work when she was a girl. When she was a bit older, she took an engineering course.

“I got inspired,” she said. “I liked working on the drawings and the machines.”

Desai earned her bachelor’s degree in mechanical engineering from the Maharashtra Institute of Technology in 2006 and was one of only two women in her class who received scholarships.

After graduation she took a job with Kirloskar Oil Engines Ltd., which manufactures diesel engines and generators. For the next seven years, she worked in the application department, where her major role was in design and development, and also worked in marketing and sales to help analyze customer requirements.

Desai and her husband later moved to the United States and settled in Cincinnati. She began to look for a graduate program in engineering.

“The type of courses I wanted to pursue were offered at Wright State,” she said.

So in 2017 she enrolled at Wright State and began working on her master’s degree in mechanical engineering specializing in thermal fluids.

But returning to college after a such a long absence made Desai a little nervous.

“Going back to a college lecture hall was a very tense situation,” she recalled.

But Desai said she got a great professor who gave her confidence. And all of her engineering professors were very available and supportive. In addition, she got a helping hand from her adviser, Joseph Slater, former chair of the Department of Mechanical and Materials Engineering.

She graduated May 4 with a 4.0 grade point average.

Desai said her internship gave her practical experience and ignited her interest in compressors and impellers.

“I can see very clearly how they work and how to analyze impellers,” she said. “I find the field very exciting. Now I’m looking to work with the turbomachinery industries.”