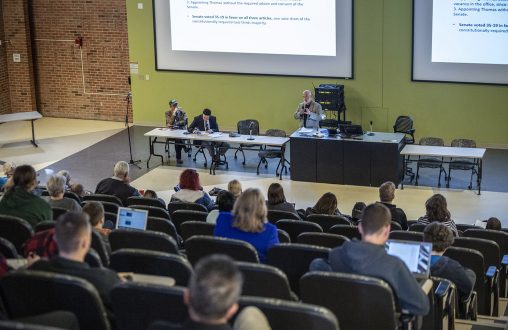 The Wright State School of Public and International Affairs organized a panel discussion of faculty experts to help the public better understand the impeachment process.

A panel presentation by Wright State University faculty on the impeachment process drew about 150 people, who heard discussion of possible scenarios and the impact on the 2020 presidential election.

Levine reviewed the power of impeachment, Fitzgerald discussed prior impeachments in U.S history, and Hannah talked about what impeachment would mean for Congress and the 2020 election.

The presentation came as the U.S. House of Representatives pursues an impeachment inquiry into President Donald Trump.

December Green, professor of political science and chair of the School of Public and International Affairs, said the panel discussion was organized to help the public better understand the impeachment process.

The audience heard an explanation of the impeachment process, the politics of impeachment, how support of House Democrats for the inquiry has changed over time, and the views of legislators and opinion leaders to watch moving forward. 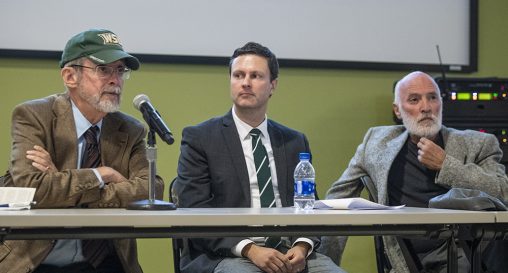 Questions from the audience included whether the House could vote to impeach without sending it to the Senate, whether the recent withdrawal of U.S. troops from Syria would affect Republican support for impeachment, and what effect refusing to honor congressional subpoenas would have on the process.

Hannah said the questions reminded him that there are many critical thinkers among the students, faculty and staff at Wright State.

“There is so much information out there and they are trying to get to the bottom of it,” he said. “What was good is it wasn’t partisan.”

Hannah hopes the event gave the audience a better appreciation of the democratic process.

“These are very significant questions, but we have a well-designed Constitution that can help guide us,” he said.