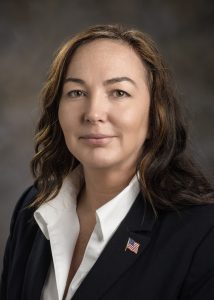 Terry Oroszi, assistant professor of pharmacology and toxicology at the Boonshoft School of Medicine.

In the past four years, Terry Oroszi, Ed.D., assistant professor of pharmacology and toxicology at the Wright State University Boonshoft School of Medicine, has given more than 30 presentations on her research into domestic terrorism. She delivered her most recent talk to the National Security Agency (NSA) at Fort Meade in Maryland in early November.

Her presentation covered insights included in a book she co-authored with David Ellis, Ph.D., an adjunct faculty member of pharmacology and toxicology, “The American Terrorist: Everything You Need to Know to Be a Subject Matter Expert.” In the book, Oroszi uses findings from 519 individuals and 46 variables to describe the demographics of those in America who have engaged in domestic terrorism.

“The folks at the NSA can use the data to understand the demographics of an American terrorist,” Oroszi said. “For example, the presentation identified the top states for residence and top 10 cities. With this information, I was able to identify patterns in the data and, along with information from the current literature, develop an eight-marker profile that identifies at-risk individuals.”

In addition, Oroszi’s presentation shared knowledge that will enable those at the NSA to improve how they communicate on aspects of terrorism in the United States as well as enhance their response. They learned to recognize and appropriately respond to potential threats related to terrorism and to notice subtle signs. Her talk helped them to summarize and apply fundamentals to other aspects of violent behaviors.

The presentation covered crisis decision-making, which involves recommending strategies based on data interpretation and communicating those strategies with others. Oroszi’s talk touched on tools that can be used to help steer potential extremists away from terrorism.

“The presentation did not just point fingers and say ‘bad guy.’ It offered suggestions on how we can change their narrative, how we can steer them down a better path,” Oroszi said. “The goal of the NSA’s work was to halt the recruitment of American citizens and to offer methods for community-based curbing of radicalization. This is a tool for coaches, teachers, colleagues, peers and family.”

Oroszi became interested in terrorism research during her service in the U.S. Army Air Defense. She was part of the Nuclear, Biological, Chemical team. In the early 2000s, she joined the Department of Pharmacology and Toxicology at Wright State University Boonshoft School of Medicine and helped develop the Chemical, Biological, Radiological and Nuclear Defense Certificate Program.

In the coming months, Oroszi will speak at Highlights for Children in Columbus and at a symposium in South Carolina where she will help brainstorm how her research can be used with artificial intelligence.

“We live in a time where active-shooter and terrorism events have become commonplace and finding a solution is on the top of everyone’s minds. We need to change the narrative,” Oroszi said. “We need to identify potential targets of radicalization and steer them down a better path.”