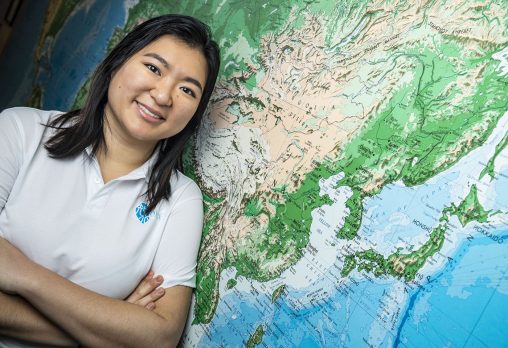 Diane He, who graduated from Wright State with a bachelor’s degree in organizational leadership, visited China after receiving a Zhi-Xing scholarship and fellowship. (Photos by Erin Pence)

It was a rare behind-the-curtain look at modern-day China.

She and other American college students from around the nation visited technology companies, the Chinese ministries of agriculture, housing and foreign affairs, and heard from Chinese government officials and university professors.

“You don’t get to visit all of these major political, business and higher ed institutions of your own accord. You can’t just walk in,” said He. “It was incredibly eye-opening to see firsthand and witness how all of these places in current modern-day China operate.”

Launched in 2017, the Zhi-Xing scholarship/fellowship is championed by the U.S. State Department and its Chinese counterpart. Sixty American and Chinese college student leaders are selected for the program each year. (Diane applied for the fellowship online, writing seven essays while on a flight with a temperamental Wi-Fi.)

The fellowship combines seminars, lectures and field visits. In addition, to visiting businesses, universities and government offices, the students go to parks, museums and galleries.

“We went to so many places,” she said. “The fellowship brought us to major political centers, major business hubs, major universities to visit and do research.” 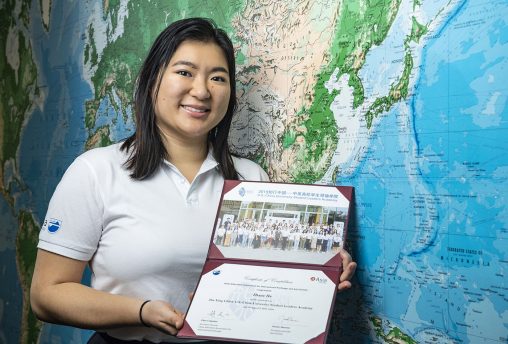 During the fellowship in China, Diane He researched and presented on social reform.

Diane learned that about 85% of Chinese people under the age of 35 don’t use cash, exclusively making purchases via electronic transfers online.

“We went to the Ali Baba headquarters to learn how they do encryption for monetary transfers,” she said.

Some students visited the Winter Olympics 2022 Committee to see how China plans to use the Olympics facilities after the games are over.

The students explored and researched three topics — China’s tech creation, sustainable development and social reform, which He focused on. They presented the findings of their research at the end of the fellowship, which lasted from late July to mid-August.

Diane said she was struck by China’s “exponential” growth since she was there six years ago.

Diane grew up in the Queens borough of New York City, moving to the Dayton area when she was 8. Her mother was a STEM substitute teacher who went on to teach Mandarin Chinese the final 10 years of her career.

She then returned to Wright State for a year but left again to study under the Confucius Institute Scholarship in Beijing from 2013 through 2014. The scholarship, sponsored by the Chinese government, is designed to educate foreign students on Chinese language, culture and history.

“I thought it was a good opportunity to get back in touch with my roots and learn what it means to be a part of a culture that my parents were originally from,” she said.

After returning to the United States, Diane worked for Fuyao Glass America in Dayton as an interpreter and public relations coordinator.

In 2018, she re-enrolled at Wright State and last May earned her bachelor’s degree in organizational leadership with a minor in international business and commerce.