Skills that come with liberal arts degrees resonate with many employers 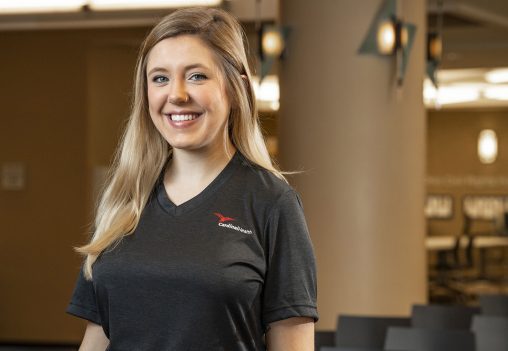 Since graduating in 2019 with a bachelor’s degree in technical writing, Katharine Adams has worked in communications for Honda and Cardinal Health in Columbus. (Photos by Erin Pence)

When she was pursuing her liberal arts degree at Wright State University, Katharine Adams had to endure the occasional remark that she would never find a job or always be underpaid.

Since graduating, Adams has worked at Honda and now Cardinal Health, gained valuable experience both in research and health care, and watched her salary grow significantly.

“The benefit of majoring in liberal arts is that it makes you marketable, sets you apart and gives you skills that are useful in all areas of your life and all areas of the workforce,” she said.

“Those are exactly the liberal arts skills,” said Wayne Stark, director of workforce development for the Center for Liberal Arts Student Success (CLASS) at Wright State’s College of Liberal Arts. “All of those things coming together imbue liberal arts with a lot of power.”

Liberal arts include the study of history, literature, writing, philosophy, sociology, creative arts and other disciplines.

“Liberal arts degrees empower individuals to successfully deal with complexity, diversity and change as well as help them see things from a myriad of interdisciplinary perspectives and develop a sense of social responsibility,” said Stark.

According to a survey by the Association of American Colleges and Universities (AACU), more than 75% of business executives and hiring managers said very important skills they look for in hiring college graduates include the ability to write and communicate effectively, think critically and work well in teams.

Travis Greenwood, who earned his communication degree at Wright State, is president and chief executive officer of The Greentree Group, a growing strategic technology consulting company headquartered in Beavercreek. Greenwood said business takes people who can communicate well with others both verbally and with the written word.

“It requires the individual to think through challenges facing the business in an organized yet intuitive way,” he said. “I’ve built a successful business during the past 27 years, hired hundreds of truly incredible people and developed a culture that is second to none. I’ve done that using the skills I developed with my degree, which continues to pay for itself as the years go by.”

According to the Brookings Institution, history majors often become lawyers or judges after completing law degrees, many philosophy majors put their analytical skills to work on Wall Street, and international relations majors often work as overseas executives for big corporations.

Many elected and appointed state officials in Ohio boast liberal arts degrees. More than half of 124 officials whose undergraduate majors were identified are liberal arts graduates in everything from dance to history to anthropology.

Jeff Hoagland, president and CEO of the Dayton Development Coalition, said his liberal arts degree from Wright State gave him the professional foundation to advance his career.

“My public administration master’s degree helped prepare me to become Vandalia’s city manager, but also helped me transition into the nonprofit economic development world,” he said. “Courses including statistical analysis, budgeting and finance, strategy, critical thinking and public speaking built on my undergraduate education and professional experience to broaden my skills.” 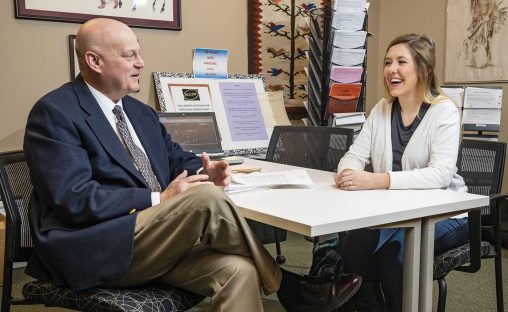 Wayne Stark, director of workforce development for the Center for Liberal Arts Student Success (CLASS), and Katharine Adams are advocates for the liberal arts.

Brent Mackintosh, president of Centerville-based Mackintosh Tool Co., Inc., said he values his English degree from Wright State because it has enabled him to excel at written communication.

“So much data is transmitted via written word such as emails, texts, PowerPoint presentations and proposals,” he said. “The English degree at Wright State has allowed me to get my points across in a succinct and easily understood manner.”

In addition, Mackintosh said, his degree has sharpened his perception in business matters.

“Looking at literature critically has allowed me to read a situation and quickly sum up the characters at play, whether it is a customer’s plant floor, employee issue or a board room filled with a team of buyers,” he said. “In this day and age, a liberal arts degree is not as respected as it should be. Hopefully this will change.”

The salaries of liberal arts graduates are comparable to other majors in the long run, according to the AACU. Studies suggest that their salaries generally catch up over time and that many advance in organizations faster than graduates from other majors.

And the broad bandwidth of a liberal arts education can make it easy for graduates to find their career niche and not be reliant on a single particular field that can become outdated and irrelevant overnight.

Adams said her liberal arts degree has prepared her to be successful by giving her leadership and communication skills as well as making her versatile.

“I have a set of skills that are useful in a number of different fields,” she said.

While at Wright State, Adams interned at The ONEIL Center for Research Communication, which strengthens technical communication by scientists and engineers while giving students from other disciplines a place to develop the art of research communication.

“A lot of her first practical experience working on real-world technical writing projects came from interning in the center,” said Brandy Foster, the center’s executive director.

Adams has worked in everything from research to health care.

“Majoring in liberal arts meant I wasn’t married to any one path. While this lent me some uncertainty when I started out, it ultimately allowed me the freedom to pave my own way,” she said. “Although I’m clearly a huge proponent of liberal arts, I think it’s necessary for STEM and the arts to coincide. In this way, our society must be STEAM-powered. “

Adams said technology and computers are assuming a greater role in many fields that have historically employed STEM graduates.

“One thing that technology cannot replace, however, is the human element that is offered by liberal arts,” she said. “Liberal arts embodies the creative, spontaneous, emotional and sometimes raw experience that cannot be imitated by computers or robots.”

AACU President Lynn Pasquerella says liberal education is more critical than ever in the nation’s historic mission of educating for democracy.

“And in a world that is globally interdependent, the best preparation that we can offer students is one that teaches them to write, speak and think with precision, coherence and clarity, to anticipate and respond to objections, to engage in moral imagination, imagining what it’s like to be in the shoes of another different from oneself, and to be adaptable and flexible in the face of that rapid change,” she said.

When prospective students ask Jonathan Winkler, professor and chair of Wright State’s Department of History, what they can do with a history degree, his reply is “anything.”

“We train people to think for themselves, to learn how to continue to learn throughout life and to be able to encounter new ideas and experiences and explain it well to others,” he said. “Ohio and the country are stronger for it.”

Adams grew up in West Mansfield, Ohio, graduating from Benjamin Logan High School in 2015. She majored in English at Wright State, but gravitated to technical writing and landed a co-op with Honda Research and Development.

“As it turns out, a technical writing degree is extremely marketable; technical writers have fundamental language and communications skills but also have the ability to think on a highly scientific level, which comes in handy in a variety of fields,” she said.

After graduating in 2019 with a bachelor’s degree in technical writing and a minor in business management, Adams was hired full time by Honda in corporate communications.

She currently works for Cardinal Health in Columbus as a communications business partner and consultant for a pharmaceutical modernization project.

Adams said her salary has increased significantly from her first job to her current position.

“I think, and my hope is, that employers are starting to recognize the importance of communicators and what we can bring to the table and are beginning to value us on the same plane as our STEM peers,” she said. “I was told by many people throughout school that I would never find a job or that I would always be underpaid. So far, nothing has been further from the truth.”