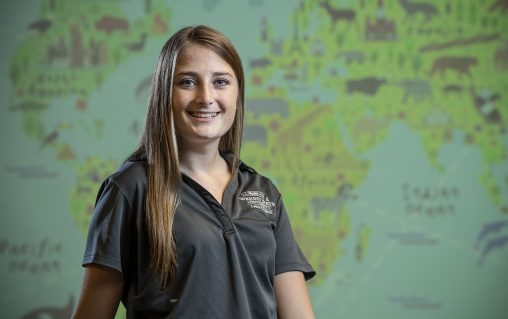 After working during the summer at an education camp in Spain, Katelyn Umstead, a senior early childhood education major, hopes to teach in Spain following graduation in May. (Photo by Erin Pence)

She’s having a love affair with Spain and may never break up.

Katelyn Umstead, an early childhood education major at Wright State University’s Lake Campus, has spent the past three summers at an education camp in Spain and hopes to teach abroad there after she graduates in the spring.

Umstead said she was bowled over by the “amazing” people and culture the moment she first stepped foot in Spain.

“I guess coming from a small town I enjoy the big cities,” said Umstead, who grew up in the western Ohio village of Coldwater. “And having warm temperatures most of the year is a big thing.”

Spain is the largest country in southern Europe, boasts a half dozen major cities — Madrid, Barcelona, Valencia, Seville, Málaga and Bilbao — and has 47 World Heritage Sites.

In the summer of 2017, Umstead worked at the Cei El Jarama educational camp in Telemanca de Jarama, a small municipality just outside of Madrid.

“You worked for 16 hours a day,” she said. “It was mentally and physically exhausting, but I would do it over again in a heartbeat.”

The camp, which was located on a farm, ended up being Umstead’s “home away from home.”

“They wanted me because I spoke English,” she said. “One of their goals is to teach kids English. They do English-immersion activities.”

Umstead returned to work at the camp in the summers of 2018 and 2019. She said the whole experience expanded her horizons.

“It opened my mind,” she said. “I’ve always thought of myself as an open-minded person, but that was before I left the United States. It made me realize that if I were to rely on other people to determine what I do with my future, I would always be in Mercer County.”

Umstead grew up with 10 siblings, most of whom lived together in the family’s four-bedroom house. Her father works at Fort Recovery Industries and her stepfather at Honda. Her mother is a social worker who once worked at Wright State and is now employed at a local nursing home.

After graduating from Coldwater High School in 2015, Umstead attended Xavier University in Cincinnati. Two years later she transferred to Wright State’s Lake Campus so she could live at home, save money and spend time with her family while she could because her goal is to teach abroad.

Umstead sees early childhood education as a way for her to help young kids.

“When I was in elementary school, I leaned on my teachers and let them be role models for me,” she said. “Of course, my parents were, but I just needed that extra attention, that extra push throughout school. That made me want to be that person for these kids in the future.”

Umstead said it is an opportunity to shape the students during their innocent age.

“It’s where you are able to help cultivate the students’ knowledge and what they learn and help give them the passion for education and the passion to want to learn, to want to be better and to be a positive influence on themselves, their family and the world,” she said.

Umstead credits Betsy Crites, education and STEM coordinator for Lake Campus Education and Human Services, for enabling her to gain experience through field placements at elementary schools and by teaching elementary students when they come to campus for STEM Days and other events.

Meanwhile, Umstead has her eye on graduation on May 2 and what comes next. She has already been accepted to teach at two schools in Spain.

Her advice to fellow college students considering an overseas experience is to just do it.

“Take that leap,” she said. “If you don’t, you’ll never know what you’re missing.”