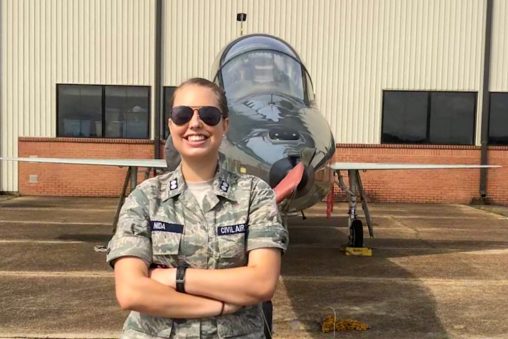 Rachael Nida, an organizational leadership major at Wright State, has been selected as the 2020 Mass Wing Encampment cadet commander.

The Massachusetts Wing of the Civil Air Patrol, an auxiliary of the U.S. Air Force, takes part in air defense intercept training and takes aerial photographs of damage from natural disasters.

Rachael Nida, a Wright State University student majoring in organizational leadership, has been selected as the 2020 Mass Wing Encampment cadet commander. Mass Wing is headquartered at Hanscom Air Force Base in Bedford, Massachusetts.

Nida will be responsible for all cadet side operations during the encampment, scheduled for August. She will oversee a staff of 40 to 45 cadets and as many as 190 students.

“During encampment, we will do physical training as a cadet wing, orientation flights where cadets get to fly, Black Hawk helicopter flights, go shooting and have other once-in-a-lifetime experiences,” she said. “For the cadet staff, it is a chance to explore leadership styles and make mistakes in a safe environment.”

The Civil Air Patrol performs emergency services for the Air Force. Nida, a cadet 1st lieutenant, is a member of the patrol’s Wright-Patterson Composite Squadron in the Ohio Wing. Capt. Kevin Demarco, commander of the squadron, said Nida is a mature young leader and one of the hardest working cadets in the squadron.

“Cadet Nida is very driven and has remarkable leadership, organizational and time management skills,” said Demarco. “She has demonstrated multiple times that she is a skilled strategic leader who has led several executive-level projects.”

Nida, who carries a 3.4 grade point average, said being selected as commander for the encampment signifies five years of hard work and training.

“I am beyond excited and look forward to the new experiences and the chances I’m being given,” she said.

Nida grew up in Wilmington, North Carolina, and the Dayton area, graduating from Bethel High School in 2018. Her father works in information technology at Booz Allen consulting and is a Navy reservist. Her mother is an administrative assistant at the Air Force Institute of Technology at Wright-Patterson Air Force Base.

Nida said her interest in the military is “a big family thing for me.”

“I have always had a love for serving and leading,” she said.