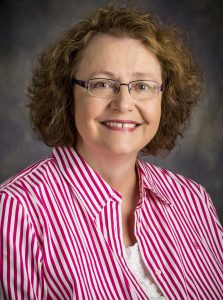 Sherry Farra, an associate professor in the College of Nursing and Health, received the 2018–19 Fredrick A. White Distinguished Professor of Professional Service Award.

Farra is actively involved in many facets of the College of Nursing and Health. She is a member of the Faculty Assembly, the Promotion and Tenure Committee and the Bylaws Committee, among others. She has also served as the College of Nursing and Health’s representative on university committees such as the Research Council and the Code of Conduct workgroup. She has served as a faculty senator and on the Faculty Senate Executive Committee.

She is also known for her service to her community. Farra is one of the founding members of the National Society for Disaster Nursing, which aims to provide education, policy, practice and research to nurses all over the country to better serve victims of disasters. In addition, Farra is active as a volunteer nurse leader in the American Red Cross.

Farra has the respect and admiration of those around her due to her service towards Wright State and her community.

“Dr. Farra’s exemplary commitment to service within the College of Nursing and Health, Wright State University, to our community, to our nation and to the nursing profession is clearly evident and absolutely worthy of recognition at the highest level,” said one of her peers.