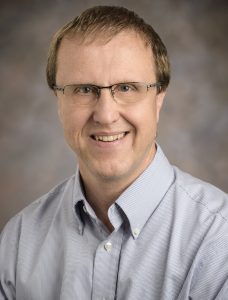 Mark Rich is the recipient of the 2018–2019 University Professor Award.

Rich’s research as a faculty member at Wright State University has led to advances in treating various diseases of peripheral nerve and skeletal muscle. He has published over 85 articles in the field of neuroscience and medicine.

Rich started his pursuit of medicine in 1983 when he received his B.S. in chemistry and biology at Bethel College in Newton, Kansas. He went on to earn his M.D. and Ph.D. from the Washington University School of Medicine in St. Louis in 1989.

From there, Rich did his residency and chief residency at Johns Hopkins Hospital in Baltimore, followed by a fellowship in neuromuscular disease at the University of Pennsylvania.

Rich’s peers at Wright State rave about his character, leadership and willingness to help others. Eric Bennett, chair of the Department of Neuroscience, Cell Biology and Physiology, said, “Mark Rich is the prototypic ‘triple threat’ as evidenced by his sustained outstanding achievements in scholarly activity, teaching and service.”