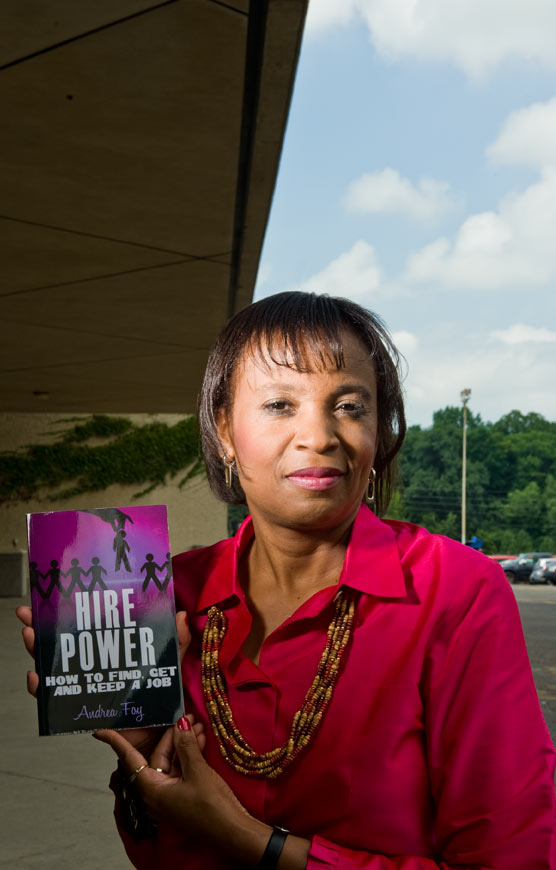 Andrea Foy, with her book "Hire Power: How to Find, Get and Keep a Job"

When Andrea Foy was looking for a part-time retail job to help offset the expenses of purchasing a house, she went to her job interview as the polished, professional woman she is. While waiting for a manager to interview her, she noticed a teenager wearing shorts and tennis shoes, slumped in a chair with her elbow on the table.

“I was thinking she’s waiting for somebody else,” Foy recalled. “When the store manager calls her name, she gets up, doesn’t shake his hand, doesn’t look him in the eye. I was flabbergasted by the whole thing.”

Raised in a military family in Fairborn, Ohio, Foy was initially shocked by the young woman’s unprofessional demeanor. Then she realized that this girl had never been taught how to act and dress appropriately in a work setting. “I started to think about how I learned things and how some other people may have not had the same opportunities,” said Foy. “It really bothered me. Here’s one of the problems we have in society—some people don’t have jobs because they don’t have the skills for the job. It’s not that they can’t learn; they just don’t know how to get in the door.”

Several months later, Foy began writing her first book, Hire Power: How to Find, Get, and Keep a Job. While the book is geared toward 15- to 21-year-olds who are entering the job market for the first time, Foy’s tips are helpful to anyone who is job searching. “You have the hire power. You are the one that controls whether you get hired or not,” said Foy.

Foy wrote Hire Power in 2008 and 2009 while working her full-time job as a senior associate analyst for the F-16 program at Wright-Patterson Air Force Base. Through her work, she met a self-published writer who offered training for new writers interested in getting their work published. During these workshops, Foy also met Dayton publisher Valerie Coleman, who released Hire Power in February 2010.

Foy, who graduated from Wright State in 1987 with a Bachelor of Arts in Communication, said her English and communication professors were always supportive of her desire to write. “It was a very encouraging atmosphere,” she recalled. “I always wanted to write, but life took over right away.”

After graduation, Foy worked briefly as a sales manager for Sears and then spent five years traveling the world as a flight attendant, until she developed vertigo and could no longer fly. After working for American Express in Minneapolis, she returned home to Dayton, where she has worked at Wright-Patterson Air Force Base since 2002.

Foy hopes to write a second book next year for employers on how to find and keep good employees. With full-time writing as her ultimate goal, she would also like to try her hand at fiction. “There will definitely be more books,” she said.

While you’re at your current job, explore what you want to do. Foy cautions against jumping into a new career too quickly if you don’t have an economic anchor. “See if you’re good at it,” advised Foy. “You might think it’s your calling, but it might not be. It’s always good to dream and do something as a hobby first, then once you achieve some success at it do it full time.”

Discouraged by a lengthy job search?

Don’t take it personally and remember that this is a tough job market. “We are going through a rough patch. It’s not permanent; we always bounce back,” said Foy. “This is one of the best dreaming times. Go to the library; you can still learn. This is a time to find out who you are and what you really want to do. Now is the time to dream and prepare yourself.”

Looking for your first job after college?

Think about why you got your degree and what you want to do with it. “Decide what is your passion. Do a lot of soul searching while you’re looking for a job,” Foy suggested. “Ask yourself: What will make me the happiest? What will make me want to get up at 6:00 in the morning, stay late at night, and work on the weekends?”

Losing the passion for what you do?

If you really don’t like where you work or what you’re doing or if you feel like you’re not making a contribution, then it’s time to make a change. To rekindle the passion, Foy advises people to “go back to your childhood and think about what you wanted to do when you grew up. What stopped you from being what that was?” Foy also suggests looking for “passion clues,” such as: What really makes you happy? What do you like to do in your spare time? What are your hobbies?