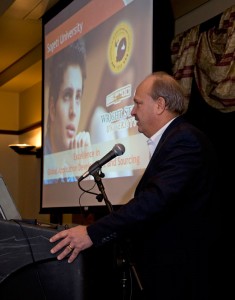 Global information services provider Sogeti and Wright State University have launched a training program that has brought Sogeti employees to Dayton from around the world.

Wright State is hosting Sogeti University, a training program for new Sogeti employees just starting their careers after college. Tailored specifically to the company’s needs, the program begins with two weeks of classes at Wright State followed by individual projects at their home sites under the supervision of Wright State faculty.

The first class of 27 students commenced Jan. 31 at Wright State’s Nutter Center. Eleven in that class are from India, with the remainder from across the United States.

“Sogeti could have chosen to do this anywhere in the world, yet they chose to do it here in Dayton,” said Vikram Sethi, Ph.D., director of Wright State’s Institute of Defense Studies and Education (IDSE). IDSE organized the program in partnership with the Wright State Research Institute.

Sogeti, which provides information technology services to business and public-sector organizations, has more than 20,000 professionals in 15 countries, including 23 locations across the United States. It is a wholly owned subsidiary of Cap Gemini S.A., listed on the Paris Stock Exchange.

But its U.S. division is based in Washington Township, where Sogeti USA LLC has its corporate offices and a local branch. Between its Dayton operations and a Cincinnati branch, Sogeti has approximately 500 employees in southwestern Ohio, said Michael Pleiman, executive vice president of Sogeti USA.

So far, Sogeti has four training sessions planned this year for approximately 100 new employees. “We would like it to be an ongoing program,” Pleiman said.

Sogeti University will be a benefit not only to the company, but also to the Dayton region and the state because it gives Ohio students another incentive to remain in the state after graduation, Pleiman said.

Wright State Provost Steven R. Angle, Ph.D., told the students the university seeks to “add back to the community” by leveraging the intellectual power of the university to have an impact on business at the national and international levels. “This program is an example of that,” he said.

Sethi gave credit for the Sogeti University concept to Sogeti USA’s chief information officer, Aseem Gupta. Gupta said he grew interested in having Wright State host the program after learning of similar ones the university has operated, including an IDSE certification program on supply chain management for Air Force and Defense Department logisticians.

Gupta also said having a university host the program increased its prestige in the eyes of new Sogeti employees. “They don’t see it as internal training anymore,” but an extension of their education, he said.

Sethi said he organized the program in partnership with Ryan Fendley, director of the Wright State Research Institute. While IDSE had experience in hosting similar training programs, Sethi said WSRI had a unique capability to identify the necessary subject matter experts within the Wright State faculty and in the surrounding business community. “For us they turned out to be an incredible resource,” he said.