On the wings of love

This video was contributed by the Dragonfly Foundation. The song used in the video, “Child,” was written and performed by award-winning recording artist Rachael Sage (MPress Records, 2003). In addition to giving The Dragonfly Foundation the rights to use her song, Sage will perform two public concerts on April 4 and 5 to benefit the foundation. Visit www.thedragonflyfoundation.org for more information. 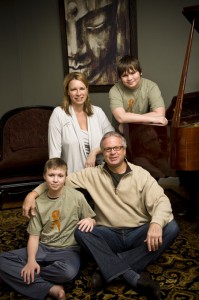 A can of Coke sat in the car of Jim and Christine Neitzke on that cold Friday night in February 2010. It belonged to their 10-year-old son Matt.

Matt had grabbed the can of pop before he left home, headed for Cincinnati Children’s Hospital Medical Center. He couldn’t drink it now. He had to wait until after his test—a CT scan—a follow-up to his recent bout with pneumonia.

Matt left his Coke in the car. He’d be back in a few hours to drink it. After all, it was just a simple CT scan.

Seven hours later, Christine drove home alone with the can of Coke.

It was every parent’s worst nightmare come true.

Matt and Jim stayed in the hospital that night while Christine took care of the couple’s older son, 12-year-old Sam. The next morning, Matt underwent biopsy surgery.

The biopsy revealed a mass the size of a baseball next to Matt’s right lung as well as smaller masses on his spleen.

The Neitzke family was about to embark on a seven-month-long journey of chemotherapy, radiation and what seemed like a never-ending stream of overnight stays in the hospital.

It was a journey that would change their lives forever.

An outpouring of love and support 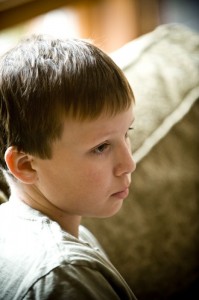 Matt Neitzke was diagnosed with stage three Hodgkin’s lymphoma at age 10. After four rounds of chemotherapy and three months of radiation, Matt is now in remission.

Following the devastating news of Matt’s cancer diagnosis, family and friends rallied around the Neitzkes.

“It got us through this,” said Christine. “Immediately, we just felt embraced by so many different communities.”

Help came from their neighbors, their church, the boys’ schools and Matt’s baseball team, the Cincinnati Red Stockings.

Then there were the little things. Small acts of kindness that brought Matt big moments of joy.

A couple of Matt’s baseball coaches arranged for an autographed baseball bat from Matt’s favorite player, Philadelphia Phillies third baseman Placido Polanco. It arrived in a big glass case, a welcome site in Matt’s hospital room as he underwent chemo.

Another autographed bat came from the Detroit Tigers. Hall of Famer Joe Morgan stopped by for a visit, along with other professional baseball players and mascots.

As Christine recalled, “He would cry at night and say ‘I just want to play baseball, Mommy.’”

There, watching all of the ups and downs was Matt’s big brother, Sam. “It was as hard on Sam as it was on Matt,” said Jim. “He was worried about his brother dying.”

During flu season, Sam could not visit his brother in the hospital. The two boys would Skype to stay in touch.

Prayer and a sense of humor got the Neitzke family through many tough days and nights. Playing Nerf basketball games and making water balloons out of latex hospital gloves provided some much-needed stress relief. 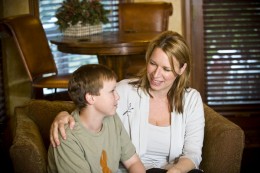 During Matt’s illness, the Neitzke family learned lessons that would last a lifetime. “It’s so important to have your health and your children’s health,” said Christine. “Embrace every moment.”

“We were lucky. We were there only three months. Some families are there for years, going through this,” said Christine.

The lessons they learned would last a lifetime.

“Never take anything for granted. That’s the number one thing,” said Jim.

“It’s so important to have your health and your children’s health,” Christine said. “Embrace every moment.”

In September 2010, after four rounds of chemotherapy and three months of radiation, the Neitzke family received the news they had been praying for. Matt was in remission.

They couldn’t walk away 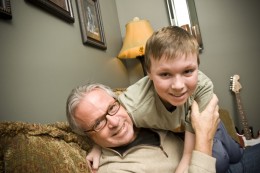 Prayer and a sense of humor got the Neitzke family through many tough days and nights. Jim (left) and Matt (right) would play Nerf basketball games and make water balloons out of latex hospital gloves for some much-needed stress relief.

The Neitzkes have nothing but words of praise and appreciation for the doctors and nurses at the Cancer & Blood Diseases Institute of Cincinnati Children’s.

“They saved Matt. They were our lifeline,” said Christine. “The quality of the staff and the care we received there was outstanding.”

But while the Neitzkes were in the hospital, they identified many needs that could improve the quality of life of patients.

Unlike Matt, who had a community of love behind him, some of the children and families at the hospital did not have the same network of support.

One day, as Christine walked down the hospital hallway, a three-year-old child in another room was crying for blue Play-Doh. Due to infection control measures, children are unable to share Play-Doh or reuse a can.

As Matt was starting to get better, Christine began talking to the staff in Child Life, who oversee the playroom and provide distractions for the kids as they undergo treatment.

They discussed coordinating drives for new DVDs and other items the hospital needed. As the wish list grew, the Neitzkes started tossing around the idea of creating their own nonprofit foundation.

In August 2010, The Dragonfly Foundation was born. Its mission: to bring comfort and joy to kids and young adults with cancer and blood diseases.

“The dragonfly represents strength and courage,” Christine explained. “In one Indian language, it means bringing comfort to kids. It was perfect.”

The foundation works in partnership with the Cancer & Blood Diseases Institute of Cincinnati Children’s to provide distractions that help ease the pain and fear patients and their families experience on a daily basis.

When Caron Bergen’s 14-year-old son, Kyle, was diagnosed with Hodgkin’s lymphoma last summer, it was a huge shock to Bergen and her family.

“When you are a parent of a pediatric cancer patient, you are completely overwhelmed,” said Bergen. “You live in a world of ‘can’t’. People can’t visit. You can’t go out in public. You’re always looking for a distraction that will bring a smile to your child’s face.” 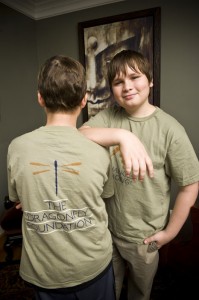 Matt (left) and Sam (right) Neitzke proudly display their Dragonfly Foundation T-shirts. “It’s great to want to help kids who are going through what I went through,” said Matt, of the foundation established in his honor. “It’s taking a bad thing and trying to make it a good thing.”

When The Dragonfly Foundation learned that Kyle was a fan of Adam Richman from the Travel Channel’s Man v. Food, they arranged for Kyle to meet Adam when he was in town for a speaking engagement.

“My son had the biggest smile on his face. It was the greatest gift,” said Bergen. “In all of the horribleness, we found a lot of light shined in our lives and The Dragonfly Foundation was one of them.”

Along with arranging celebrity visits, distributing tickets to families for special events such as Disney on Ice, and securing supplies for the hospital playroom, The Dragonfly Foundation is providing laptops so patients can watch DVDs in their hospitals rooms and Skype with their family, friends and celebrities. To date, they have arranged for the donation of 25 laptops and hope to provide 30 more to the hospital.

The Dragonfly Foundation is also creating several programs to support patients (age 0-35) and their families from when they enter Cincinnati Children’s to the time they leave. These include a buddy system for parents, a wall décor program and the “I Am Still Me” program—a program to help patients cope with the trauma of losing their hair due to treatment.

In April, they will launch the Beads of Courage project. Already in existence in more than 80 hospitals nationwide, the program provides each child with a strand of beads spelling out his or her name, along with a Dragonfly bead. Beads are added to mark each treatment milestone. For example, a glow-in-the-dark bead represents a radiation treatment. It is not unusual for some children to amass 30, 40, 50 or more feet of beads.

Having a child with cancer or a blood disease is draining—mentally, physically, emotionally and often financially. “Part of what we’re doing is trying to identify those families with less wherewithal to buy them meal and gas cards,” said Jim.

The challenges are even greater for single parents and for families who must travel great distances for medical treatment. According to John Perentesis, M.D., director of the oncology division at Cincinnati Children’s, 45 percent of patients come from outside the region.

“Having a child with cancer just turns your world upside down. Words can’t describe what a wrenching experience it is for any family,” said Perentesis. “The Dragonfly Foundation helps catch people and help them move forward. We can’t thank them enough for what they’re doing. They have touched many lives in a short period of time.” 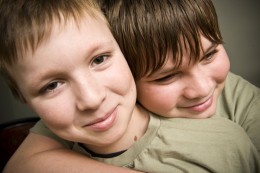 Sam Neitzke (right) embraces his younger brother Matt. “It (cancer) was as hard on Sam as it was on Matt. He was worried about his brother dying,” said the boys’ father Jim.

Ria Davidson serves as vice president of The Dragonfly Foundation. Davidson and Christine Neitzke met at a public relations agency 20 years ago. They have been best friends ever since.

“To see Matt go through the horror of chemotherapy and radiation was extremely difficult. To visit a 10-year-old in the hospital and then see babies, teenagers and young adults with cancer is more than you can stand,” said Davidson. “That’s just as an outsider. I can’t even imagine what it would be like as a parent to see your child suffer.”

With Cincinnati Children’s focused on research, treatments and cures, The Dragonfly Foundation fills a niche that a nonprofit hospital cannot. “If we can help them put together programs that will benefit patients, those are resources that can be applied to curing and fixing kids so that hopefully, someday soon, children won’t have to go through what Matt went through and what other kids are going through.”

Aside from getting married and having her own children, Davidson said working with The Dragonfly Foundation is “the coolest thing I’ve ever done.”

“It’s great to want to help kids who are going through what I went through,” said Matt, of the foundation established in his honor. “It’s taking a bad thing and trying to make it a good thing.” 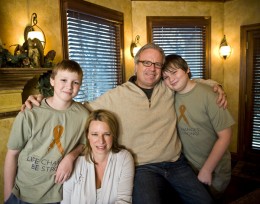 Following the devastating news of Matt’s cancer diagnosis, family and friends rallied around the Neitzkes. “It got us through this,” said Matt’s mom Christine. “Immediately, we just felt embraced by so many different communities.”

Matt celebrated his 11th birthday in December 2010. Today, he is a happy and healthy fifth grader. But there are a few milestones left to go before he is considered “clean.”  Over the next five years, he will undergo periodic tests and scans to make sure he remains in remission.

And he’ll be on the baseball diamond, playing the sport he loves to his heart’s content.

More on the Web:

Visit www.thedragonflyfoundation.org to watch videos and read more stories of how they are bringing comfort and joy to kids with cancer.