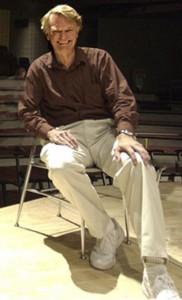 W. Stuart McDowell will be the featured presenter at this year's Friends of the Libraries luncheon.

W. Stuart McDowell, Ph.D., will discuss the continued success of the Wright State Motion Pictures program at the university’s annual Friends of the Libraries luncheon on May 3 at noon in the Wright State University Nutter Center Berry Room.

McDowell is a professor and the chair and artistic director for the Department of Theater Arts, Dance and Motion Pictures. His presentation, “Lights, Camera, Action! Wright State’s Motion Pictures Past, Present and Future,” will feature film clips of various Wright State productions and student projects.

Since McDowell first brought his expertise to Wright State in 1994, he has increased student scholarship in his programs tenfold. His students have excelled in their professions producing and writing feature-length and short-form films. Wright State students have won Golden Globe and Emmy awards. They have worked on major film projects such as the Emmy award-winning Band of Brothers by Tom Hanks and Steven Spielberg.

Student films have been awarded featured screenings and awards in prominent regional, national and international festivals from the Sundance Film Festival and the New York Expo of Short Film and Video to the Athens International Film and the Locarno Film Festivals.

Wright State film faculty have multiple recognitions including an Academy Award nomination for The Last Truck: The Closing of a GM Plant and an Emmy Award for The Lion in the House, a six-hour HBO documentary about children struggling with cancer in the Children’s Hospital of Cincinnati.

McDowell worked for two decades as a playwright, translator, composer, director, artistic director and producer before coming to educational theater. He holds a B.A. with honors from Macalester College and an M.A. and Ph.D. from UC Berkeley.

Recipient of a two-year Fulbright Scholarship at the Berliner Ensemble in Germany, he translated and directed numerous dramas by Goethe, Wedekind, Weiss and Brecht.

Proceeds from the event benefit the Friends of the Libraries’ event programming and support the University Libraries.

The cost of the luncheon is $17 for Friends of the Libraries members and $19 for non-members. Attendees can choose Jack Daniels Glazed Chicken or Linguini al Pomodoro. Both lunches include a garden salad, dessert, coffee and iced tea.

Registration is required by April 29 and can be made by calling (937) 775-2380 or online at www.libraries.wright.edu/calendar/events.