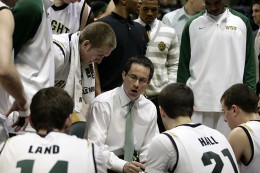 Head Coach Billy Donlon and his squad will be in Italy for 10 days this August. The team will also start the 2011-12 basketball season with games against Ohio State and Florida.

The Wright State men’s basketball team will play in the four-game Global Sports Shootout to start the 2011-12 season, facing Ohio State, Florida and North Florida on the road and Jackson State at home.

“I am excited to participate in this event as we will have a chance to compete against two of the best teams in college basketball in The Ohio State University and the University of Florida,” WSU head coach Billy Donlon said. “North Florida and Jackson State both will compete for their league championships, which will also help prepare our team for Horizon League play. I believe our team will need to grow up quickly and the only way to do that is by playing the best and we will certainly do that with our nonconference schedule.”

The Raiders have played twice at OSU, the most recent was early in the 1992-93 season. Wright State has never met the other schools. Florida finished 26-7 last year with the nation’s eighth best RPI. North Florida advanced to the championship game of the Atlantic Sun Tournament while Jackson State of the SWAC ended the season at 17-15, 12-6.