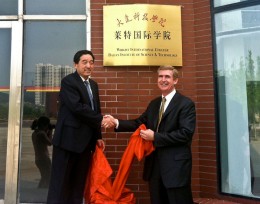 A whirlwind, 10-day trip to China led by Wright State Provost Steven Angle resulted in stops at nine Chinese universities and produced dual-degree agreements with four of them.

The trip included visits to universities in Shenyang, Dalian and Taiyuan. Agreements were signed with Dalian Jiaotong University, the Dalian Institute of Science & Technology, Shanxi University of Finance and Economics, and Taiyuan University of Technology.

“Our students are going to work in a very small world in a global economy, and they need to be able to relate to people from different cultures, from different countries,” Angle said. “This is one way for us to provide an experience for our students who can’t study abroad to interact with students from another country.”

About 50 students from the Dalian Institute of Science & Technology (formerly Dalian Jiaotong University – Information Engineering Institute) are expected to attend Wright State this fall under the agreement.

For several years Wright State has been sending students to Dalian to take courses in Chinese language and culture as well as to teach English informally to Dalian students. Currently there are two Wright State faculty members and Wright State graduate students at Dalian teaching English to the students there.

Wright State has a master’s program in teaching English as a second language. Under the agreement, Wright State students will go to Dalian to complete their practicum and teach English to the Chinese students there.

“For our students who go there to learn language, culture, history, it can build on our programs in liberal arts,” Angle said.

In addition to visits at the Chinese universities, the Wright State delegation also stopped at the Ministry of Education and the American consulate, in order to improve the visa process for the Chinese students. The group also attended a ceremony that marked the Dalian Institute of Science & Technology becoming an independent institution.