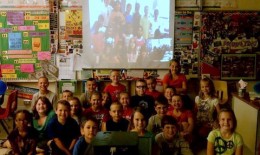 When school starts up again Brittany Andrix plans to introduce her new class to others across the country like she did last year. In this photo her class is talking to a class in New York.

Most people don’t think about their job while they’re on vacation. But while she was honeymooning in Jamaica, Wright State alumna Brittany Andrix added an entire section to her third-graders’ curriculum.

While sitting poolside, thousands of miles away from her home in Miamisburg, Andrix met Marissa Dublar, a second-grade teacher at Southampton Elementary on Long Island, New York. The two quickly hit it off, and thought that their students might like each other too.

The trouble was figuring out how to get the kids connected. They were uninterested in traditional snail mail, and Andrix and Dublar thought email would be too unsupervised.

The answer? Web cams. Andrix’s students use Google Chat to talk face to face with their New York buddies, swapping stories about what it’s like to live in Miamisburg and Long Island.

Sometimes both classes get together for a big chat, but more often, buddies meet individually. After Easter weekend, students had a great time comparing notes on their celebrations.

There are occasional unscheduled video chats. During a snow day, Andrix gave Dublar’s students a tour around her snowed-in hometown.

The project involves non-virtual activities too. At the outset, each student is interviewed by a friend, who writes a biography to send to their web pal. They also research Miamisburg history, write a community journal and send their reflections off to New York.

During the unit “B is for Buckeye, E is for Empire,” the kids learn about the differences between their two states. 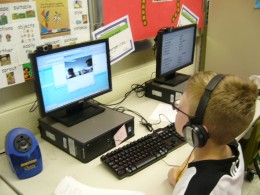 Andrix set up the stations in her classroom so her students could easily video chat with students across the country.

“We’ll compare our A to their A all through the alphabet,” says Andrix, “and then the children do Venn diagrams comparing our city to their city.”

“My students always think that the whole state of New York is like New York City,” says Andrix. “They don’t look out their window and see the Statue of Liberty. It’s always a huge geography lesson for the kids to find out that all of New York is not like that.”

At Christmas, the cultural exchange continues with buckeye-themed Christmas gifts and other treats sent through the mail.

For the students, the presents and projects are just icing on top of the cake. The best thing about their web pals is seeing them face-to-face over the internet.

“They love it,” says Andrix. “They’re so tech savvy. This is the culture they’ve grown up in.”