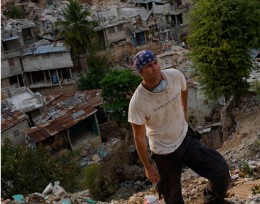 Eric Klein, pictured here in Haiti, will give the keynote address.

The entire Wright State campus community is invited to attend this year’s Freshman Convocation. The event will welcome and celebrate our incoming freshman, the class of 2015.

Eric Klein, founder and CEO of CAN-DO.org, will give the keynote address.

Freshman Convocation will be held at 3 p.m. Friday, Sept. 2, at the Wright State University Nutter Center. Shuttles will provide transportation from the Student Union and campus residence halls beginning at 2 p.m.

Eric Klein is the founder and CEO of CAN-DO (Compassion into Action Network-Direct Outcome Organization), VirtualVolunteer.tv and The CAN-DO Network. His grassroots organizations provide immediate, frontline relief for those whose lives are disrupted by disaster.

Klein is passionate about providing immediate relief with “100 percent accountability and zero red tape.” Through live streaming video, archived footage and photographs, his organization’s websites enable people who make charitable donations to actually see how their money is being spent and track progress every step of the way.

In 2004, Klein was in a car accident that changed his life. He took his settlement money to Sri Lanka, where politics and red tape hampered the tsunami relief efforts of large organizations.

Within weeks of returning home from Sri Lanka, Hurricane Katrina struck the Gulf Coast of the United States. There, Klein immediately provided grassroots relief backed by his own savings, staying true to his word of “putting his money where his mouth is.”

Klein lived on the Gulf Coast for nearly a year, providing aid to hurricane victims. He set up over 25 relief distribution centers, covering 8,000-plus miles throughout Alabama, Mississippi and Louisiana.

Recently, Klein took his grassroots approach to Rawanda, Africa, where he continues to work with the local government to help refugees and rebuild schools. CAN-DO is also working in Haiti to provide housing to those displaced by the 2010 earthquake.

Participants can view videos and even see live streaming footage of how their donations are directly impacting the communities and individuals whose lives they have touched.

Klein’s “get it done” attitude and simple approach to grassroots relief has gained recognition and continued support from politicians and civic leaders, including former President Bill Clinton.

Klein was chosen out of thousands of applicants nationwide to participate in Oprah Winfrey’s primetime TV series, The Big Give, a reality show where he competed to change the lives of strangers.