A competition guaranteed to satisfy anyone’s sweet tooth is among this year’s homecoming activities. Wright State’s Greek Affairs Council is sponsoring the first annual Cupcake Wars Friday, October 7, from 5 to 7 p.m. during Raider Fest next to the soccer field. 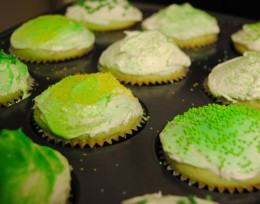 Teams will create cupcakes, which will be judged by local celebrities, including Student Government President Paul Reed and the head baker from Gigi’s Cupcakes. Categories for judging include best traditional flavor, best exotic flavor and a special spirit award for cupcakes with Wright State–themed decorations.

“I’ll be really impressed if someone comes up with a bacon flavor,” said Sean Curtis, president of the Interfraternity Council.

In the past, Greek Affairs has organized a chili cook-off. Like everything else, the event was affected by the economy. Cupcakes provided a tasty alternative to the expensive operation of the chili cook-off, which involved supplying electric power to a tent on the soccer field.

The switch brought some unexpected inspiration to Curtis, who now plans on having a different competition every year, ranging from desserts to barbecue. For students intimidated by the thought of cooking chili, cupcakes are a welcome opportunity to get involved in homecoming activities.

Renai Bowers, public relations officer for the Wright State Chapter of the National Panhellenic Conference, agreed. “We wanted to do something that was fun and different—something that the students could really take pride in,” she said.

The winners of Cupcake Wars can expect some exciting prizes, including gift cards from Gigi’s Cupcakes and what Curtis describes as an “awesome” trophy.

For those not participating, there will still be a chance to sample the creative cupcakes. Bakers will prepare mini cupcakes to hand out to spectators.

Campus Recreation will be hosting a cornhole tournament during Cupcake Wars, with a set of Wright State–themed cornhole boards for the winner. There will also be music and other festivities, followed by the homecoming soccer game.