Dept. of Biochemistry and Molecular Biology to host Nobel Prize winner for lecture 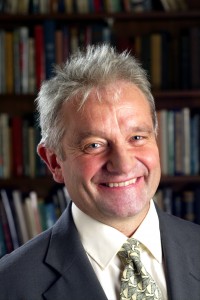 Nurse is internationally known for his experiments on the molecular mechanisms regulating the mitotic division cycle in eukaryotic cells.

Nurse was born into a working class family in Norwich, Britain, and received his undergraduate degree from the University of Birmingham. He obtained his Ph.D. in biochemistry in the School of Biological Sciences at the University of East Anglia in 1973.

Stimulated by Leland Hartwell’s genetic analysis of the budding yeast cell cycle, Nurse sought a postdoctoral position with Murdoch Mitchison in Edinburgh, to use genetics to study the cell cycle of fission yeast. This work led to the publication in 1976 of the landmark paper “Genetic Control of the Cell Division Cycle in the Fission Yeast Schizosaccharomyces pombe” by Nurse, Thuriaux and Nasmyth, which identified the gene cdc2 that controls the progression of the cell cycle from G1 phase to S phase, and the transition from G2 phase to mitosis.

Since 1976, Nurse has published more than 150 papers on cell cycle regulation and DNA replication in fission yeast, including the identification of the human cdc2 homolog, the CDK1 cyclin dependent kinase.

Nurse has served as chair of the Department of Microbiology at the University of Oxford, director of research at the Imperial Cancer Research Fund (now the Cancer Research UK London Research Institute), and president of Rockefeller University in New York City.

In 2010 Nurse became president of the Royal Society of London, a fellowship of the world’s most eminent scientists, founded in 1660, and the oldest scientific academy in continuous existence. It was announced in July 2010 that Nurse will also become the first director and chief executive of the UK Centre for Medical Research and Innovation beginning in 2011.

The UKCMRI will be Europe’s largest biomedical research facility with funding of nearly a billion dollars provided by a range of government and charitable organizations including the Medical Research Council, Cancer Research UK, the Wellcome Trust and University College London. Around 1,250 biologists, clinical scientists, chemists, physicists, mathematicians and computer scientists will work alongside each other at the new facility. Key objectives to Nurse are to bridge the traditional barriers between different research teams and disciplines, and to improve the dialogue between scientists and the public.

Among Nurse’s numerous distinctions, he became a fellow of the Royal Society in 1989, and was awarded the Queen’s Medal of the Royal Society and became a foreign associate of the U.S. National Academy of Sciences in 1995. He received the Lasker Award for Basic Medical Research in 1998, and was knighted in 1999. In 2001, Sir Paul shared the Nobel Prize in physiology or medicine with Leland Hartwell and Timothy Hunt, for their discoveries regarding cell cycle regulation by cyclin and cyclin dependent kinases.

In 2006, Nurse received the Copley Medal, an award given by the Royal Society of London in recognition of “outstanding achievements in research in any branch of science.” The Copley Medal was first awarded in 1731; Nurse joins Benjamin Franklin, Louis Pasteur, Max Planck, Niels Bohr, Albert Einstein, James Watson, Francis Crick, Peter Mitchell and Stephen Hawking as a recipient of this prestigious honor.