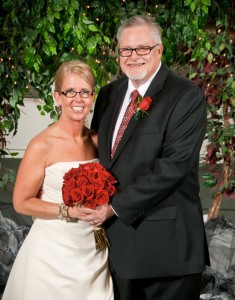 “I now pronounce you Mr. and Mrs. Raider.”

A wedding on campus was a perfect fit for this couple; not only did they meet and fall in love at Wright State, they also share their last name with the university’s mascot.

Senior library associate Mary Healea (now Raider) and government and legal coordinator Ran Raider have worked for the library for a combined total of more than 43 years. Yet it wasn’t until a couple of years ago that their love story began.

“I was interested in Ran,” said Mary. “So I asked one of his co-workers in his department to feel him out, to see if he might be interested in me.”

That co-worker was reference specialist Beth Anderson. She took her job of keeping the courtship a secret very seriously, going so far as to give the couple code names.

“Ran was ‘Red Eagle’ and I was ‘Pink Flamingo,’” laughed Mary.

The couple dated for almost a year before letting the rest of their co-workers know.

“When we started dating, it just felt right,” said Ran. “We were absolutely comfortable with each other.”

“Plus, she picks better fantasy football teams than I do,” he joked.

Two years later, Ran knew the time had come to ask Mary a very important question. One morning he asked her “Do you know what time it is?” When Mary said she didn’t, he said simply, “It’s time for me to ask you to marry me” and presented her with a ring.

“It totally caught me off guard,” said Mary. “I just kept saying ‘Are you serious?’ over and over.” 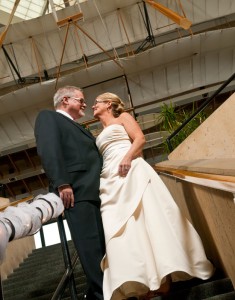 The couple said their vows beneath a replica of the 1903 Wright Flyer.

The two didn’t plan to have an elaborate wedding, preferring to spend their money on a honeymoon cruise to the western Caribbean.

When Mary put in her request for vacation time for the honeymoon, her supervisor Susan Wehmeyer inquired about the wedding plans. Mary told her that they hadn’t given it much thought. They would probably just have a low-key ceremony a few days before their honeymoon.

Later that day, Wehmeyer happened to be in a meeting with Ran’s supervisor, Sue Polanka. Together, they hatched a plan to throw a beautiful wedding for their beloved employees.

Though Mary and Ran are the fourth couple of library employees to marry, this was the first wedding ceremony to be held in the library itself.

Both the ceremony and the reception were held in the Dunbar Library’s second floor atrium, under the replica of the 1903 Wright Flyer. The room had been transformed into a romantic space for over 100 guests.

Tables were adorned with black and white cloth and small vases of red roses. A long white aisle runner led to an archway of small trees. Even the library’s potted plants were festive, glittering with strands of Christmas lights.

A string quartet of music students played as the bride made her way down the aisle.

“I remember seeing her when she got off the elevator and I just said, ‘Wow!’” said Ran.

The ceremony was short, simple and heartfelt. Naturally, there were a few quiet giggles about the groom’s last name.

Mary and Ran felt that it was the perfect event for them and that everything went off without a hitch. Now they look forward to spending their lives together.

“He’s the love of my life,” said Mary. “I really do believe that he’s my soulmate.”

Mary and Ran were married at the library. The couple have worked there for a combined total of more than 47 years.

Both the ceremony and reception were held in the second floor atrium of the Dunbar Library.

The ceremony was short, simple and heartfelt.

A string quartet of music students played as the bride made her way down the aisle.

This was the first wedding to be held in Wright State’s library.

The wedding made the couple officially Mr. and Mrs. Raider.

Ran and Mary are one of several couples who have met and fallen in love as library employees.

A local television news crew came out to do a story on this campus wedding.

The couple said their vows beneath a replica of the 1903 Wright Flyer.