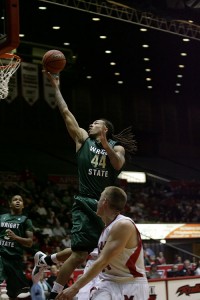 The Wright State men’s basketball team nearly saw a five-point lead slip away in the final minute, but held on for a 51-49 win over the Miami RedHawks Saturday at Millett Hall.

Miami jumped out to a 9-1 lead on threes by Julian Mavunga, Will Sullivan and Josh Sewell three minutes into the contest and the margin was seven until an 8-0 WSU run, capped off by a Reggie Arceneaux three, put the Raiders up for the first time at 16-15 at the 4:27 mark.

The one-point lead then seesawed between the two teams the rest of the half before the RedHawks went into the break up 22-21 on a Mavunga dunk in the final minute.

Miami tied it at 37 on a Mavunga free throw with 8:13 left, but Armond Battle gave the Raiders the lead for good with a three and the WSU lead was 50-45 on two Julius Mays foul shots with 56 seconds remaining.

Jon Harris, however, cut the margin to two with a three-pointer and the RedHawks looked to be in position to tie the game as Mavunga went to the foul line with 2.1 seconds left.

Darling was the only Raider in double figures as he scored 13 off the bench.  Arceneaux and Mays each had eight.

Mavunga led Miami (2-5) with a double-double of 19 points and 16 rebounds while Harris had 10 off the bench.

Wright State (4-6) faces another local rival on Wednesday, December 14, as the Raiders host Cincinnati in a 7:00 contest that will be televised on ESPN2.