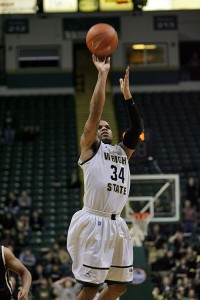 After Idaho sent the game into overtime with a halfcourt three, a buzzer-beating three by Julius Mays in the extra period gave Wright State a 80-78 win Tuesday night at WSU’s Nutter Center.

Neither team had more than a five-point lead until the Vandals went up 43-36 with seven straight points early in the second half.  The margin was still seven before the Raiders tied the game at 54 with an 11-4 run, capped off by a Mays three-point play with 7:26 remaining.

Djim Bandoumel put Idaho back in front with a foul shot at the 2:13 mark, but Reggie Arceneaux followed with a jumper and WSU looked to be in good shape as two Mays foul shots gave the Raiders a 67-63 advantage with 21.5 seconds left.

A three from the left corner by Matt Borton, however, started the Vandals on their comeback and, after Arceneaux made two free throws at the 1.1-second mark, Landon Tatum took the inbounds pass from Stephen Madison and banked in a halfcourt three from the left side to force overtime. 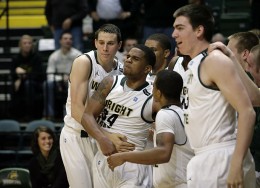 An Arceneaux three followed by a Mays jumper with 1:36 to go in overtime put Wright State up 75-72, but back came Idaho as a Kyle Barone foul shot and a Deremy Geiger three from the right wing with 19.5 seconds left gave the Vandals a 76-75 edge.

Another Arceneaux jumper gave the Raiders the lead again, but it looked bleak as Tatum found a wide-open Dazmond Starke for a layup with four seconds left.

That set the stage for Mays’ game-winner as he dribbled up the court and banked in a three from the top of the circle to give WSU the win as time expired.

Idaho shot 48 percent overall, 44 percent from three, compared to 46 percent and 32 percent, respectively, for Wright State, but the Vandals were just 18 of 30 at the foul line while WSU was 13 of 18.

Mays paced all scorers with a career-high 28 points, bettering the 25 he scored against Charlotte on November 26.  Arceneaux also set a new career-high with 19, with his previous best being 15 versus Jackson State on November 16.

Barone led Idaho (7-5) with a double-double of 21 points and 14 rebounds while Starke had 11 off the bench.  Three other Vandals had nine points each.

Wright State (5-8) wraps up the four-game homestand on Thursday, December 22, with a 7:00 contest against Central Michigan.