((The following article appeared in the Spring 2012 issue of the Wright State University Magazine.)) 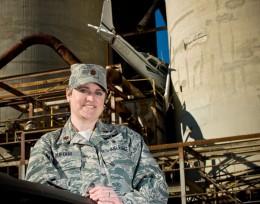 Maj. Karey Dufour is the first student in the Flight and Disaster Nursing specialization.

When Hurricane Katrina struck the Gulf Coast in 2005, military and civilian emergency workers labored side by side to treat the wounded and evacuate the refugees. Despite their mutual determination to help others, the two groups had little experience working together and quickly learned that they didn’t speak the same language. The communication gap between the military personnel and civilian first responders often bred anger and frustration, hindering their life-saving mission.

In the aftermath of Katrina, the United States government recognized the need for increased understanding and cooperation between members of the military and their non-military counterparts. The Department of Homeland Security even issued a directive to standardize the training of emergency responders.

Meanwhile, the United States Air Force was looking for additional educational programs for its flight nurses. It already taught a six-week course in flight nursing, but what the branch really needed was a graduate degree program to give its nurses more concentrated, in-depth training.

Then the Air Force announced it would move its School of Aerospace Medicine from Texas to Wright-Patterson Air Force Base in Dayton, Ohio, as part of the Base Realignment and Closure. With Wright State in Wright-Patt’s backyard, the pieces began to fall into place.

The university accepted the challenge of addressing both the flight and disaster needs for the nursing field by developing a unique specialization in its already successful clinical nurse specialist (CNS) program.

“Wright State was really perfect for this,” said Gail Moddeman, Ph.D., R.N., director of the CNS program. “We have a close working relationship with the base and excellent nursing programs.”

Professors from the College of Nursing and Health worked closely with the Air Force to develop the specialization’s curriculum, traveling to Scott Air Force Base in Illinois to learn about the military.

Students in the flight and disaster specialization come to the program with a bachelor’s degree in nursing and at least two years of flight experience. Military candidates are chosen by the Air Force Institute of Technology while civilians apply directly to Wright State.

The specialization launched in Fall 2010 and its first student will graduate this spring: Major Karey Dufour.

“Military members and their families have given so much to this country, in the U.S. and abroad, and they deserve the best that the Air Force aeromedical evacuation community can give them,” Dufour said. “With the advanced skills I’ve learned in the program, I feel more confident in providing the best care to all my patients.”

Students in the program complete all the requirements of the regular CNS master’s degree program. A CNS is an advanced practice nurse, a clinical expert in a specialized field.  They may provide training for other nurses or teach patients and their families to help manage their health at home. A CNS can also write protocols for their hospitals and clinics or conduct medical research.

CNS students wishing to specialize in flight and disaster nursing take additional classes on caring for patients in a crisis and during air transport. They gain clinical experience in settings such as hospital trauma units, CareFlight or military aeromedical units. The specialization prepares students to manage critical care patients in unstructured environments.

“We look at some of the unique challenges that flight nurses face, things like altitude physiology,” said Moddeman. “The air pressure in an airplane changes how the body and our equipment behave.”

“You can’t just take a patient and throw them on an airplane,” added Dufour. 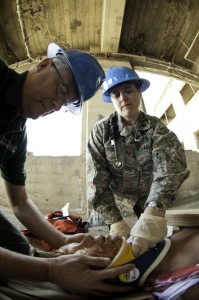 Students in the program take hands-on disaster preparedness courses at the Calamityville Tactical Laboratory, a component of the Wright State University National Center for Medical Readiness, an Ohio Center of Excellence. There they can practice caring for patients in a variety of situations from natural disasters to terrorism and combat.

“There is no other program like this across the country,” said Dan Kirkpatrick, an Air Force veteran and Wright State clinical instructor who teaches the disaster courses in the program. “Wright State is really on the cutting edge of this.”

The program is still evolving, based in part on feedback from Dufour. “Being the first person in the program, I’ve been able to work very closely with the faculty,” said Dufour. “They have been really receptive to my comments and we’re shaping this program as I go along.”

Dufour believes that one of the program’s biggest strengths is improving understanding between military personnel and civilians in a crisis. Commissioned since the day she graduated college, Dufour has had limited exposure to what she calls “the civilian world.” “I have a lot to learn on the military side, but I have even more to learn on the civilian side,” she said.

Dufour has already put her education to good use. Though the CNS program does not require students to complete a thesis, Dufour began researching communication tools that military staff and civilians use when handing off patients for air transport.

Evacuating patients during disaster and combat situations is fast paced, hectic and often dangerous for those involved. Ground medics and nurses may not have time to fully brief the evacuation team on each patient, and flight nurses rarely have time to go through each patient’s chart.

“We often only have minutes to land and load patients,” said Dufour. “Most of the time we don’t even turn off the plane’s engines.”

Based on what she had learned in the program and by reviewing best practices in use throughout the military, Dufour came up with her own tool. The Situation Background Assessment Recommendation (SBAR) tool functions as a sort of checklist to quickly communicate important patient information in a simple, visual format.

Dufour’s SBAR was adapted from five different communication tools, including other variations on the SBAR model. It was developed and tested by Dufour and a group of other researchers in conjunction with a study funded by the Air Force 711th Human Systems Wing.

The potential value of Dufour’s SBAR tool is already being recognized. Dufour won third place for her project at the annual Association of Military Surgeons of the United States Conference, and the tool is currently under trial implementation in the Air Force.