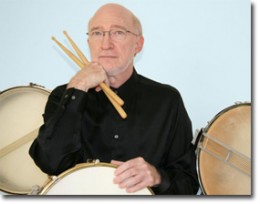 One of the world’s premier virtuoso performers on the xylophone and marimba, Bob Becker, will perform at Wright State on April 2.

“Bob Becker is one of the world’s most well-know and respected percussionists—a true master of drumming,” said Wright State percussion instructor Gerald Noble. “He is a pioneer in our industry and has inspired generations of percussionists.”

During the concert, Becker will perform with Noble, students in the Wright State Percussion Ensemble, and several guest artists from universities and symphonies around the Midwest.

“Hosting Bob Becker brings much recognition to Wright State percussion and is quite an honor for both myself and my students,” Noble said.

Considered to be one of the world’s premier virtuoso performers on the xylophone and marimba, Bob Becker appears regularly as an independent solo artist and clinician. In particular, his work toward resurrecting the repertoire and performance styles of early 20th century xylophone music has been recognized internationally.

Becker has recorded and toured with the Grammy Award–winning Steve Reich and Musicians. He has toured extensively throughout North America, Europe and Asia, and has recorded over 25 CDs.

The performance is presented by the Wright State Department of Music as part of its annual Artist Series.

Tickets are $12 for adults and $10 for students, seniors and Wright State faculty and staff. They can be purchased at the Student Union Box Office or by calling (937) 775-5544.