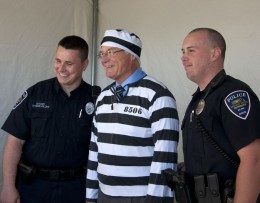 Campus police placed Hopkins under faux arrest at noon, handcuffing him in his University Hall office and incarcerating him in an open tent in the midst of Wright State’s “April Craze” festival. Wearing a black-and-white striped prison shirt and hat, Hopkins pleaded with passing students, faculty and staff to help him pay his $250 bail.

He was among 16 Wright State faculty and staff who volunteered for “jail and bail” as part of the March of Dimes’ 2012 March for Babies fundraising campaign. Hopkins and his wife Angelia are co-chairs of this year’s campaign.

“I was happy to go to jail so I could help raise money for the March of Dimes. I’m really honored to serve as chair,” Hopkins said.

The heads of three local educational institutions came to his aid.

Daniel Curran, president of the University of Dayton; Stephen L. Johnson, president of Sinclair Community College; and Col. Timothy J. Lawrence, commandant of the Air Force Institute of Technology, responded to Hopkins’ plea for each to pledge $50 to help get him out of stir.

“I want to thank President Johnson, President Curran and Col. Lawrence for helping me get out of jail,” Hopkins said.

Hopkins quickly reached his $250 bail, but he lingered to collect another $90. “We’re doing it for babies,” he said.

The March for Babies’ community fundraising goal is $260,000. The campaign  culminates at 9 a.m. Saturday, April 28, with a celebration and walk at Carillon Historical Park in Dayton. Visit www.wright.edu/marchforbabies to learn more or make a donation.