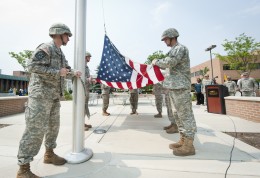 Wright State Army ROTC cadets raise the American flag in observane of Memorial Day, May 25 at Founders' Fountain on campus.

The precursor to Memorial Day, Decoration Day was first observed in the United States on May 30, 1868.

Following the loss of more than 600,000 American lives during the Civil War, the date was specifically chosen so it would not coincide with a battle won or lost on either side, but would equally honor and celebrate the Americans who made the ultimate sacrifice for their country.

Lieutenant Colonel Maria Emery, a professor of military science and the commander of the Army ROTC at Wright State, shared this fact at a May 25 Memorial Day observance flag raising ceremony at Founders’ Fountain. She drew attention to the holiday’s unique American roots, themes and celebrations.

Emery said the ceremony is helpful for Wright State’s Army cadets for many reasons. 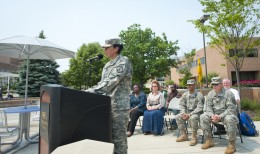 “I hope they take away the importance of Memorial Day, the mechanics of being involved with a ceremony like this, and it’s important to remember that the cadets that we have volunteered and committed to the Army during a time of war,” said Emery. “To me that’s very, very impressive, and I think for them to learn that we recognize those that make those kind of sacrifices is really important.”

In a brief address to the veterans, students, staff and faculty who gathered for the ceremony, Emery spoke about the power of American optimism and decoration.

“The American spirit is guided by optimism. It is what has guided us through hard times and it has guided the men and women in uniform who knew that our freedom was worthy of their greatest sacrifice,” said Emery.

Noting that Americans spent an estimated $6 billion last year to decorate at Christmas, Emery said tongue-in-cheek, that Americans are well-versed decorators in general, but perhaps greatest at decorating on this holiday.

“A decoration is more than just a ribbon, a flower or a medal. It is our way of gracing someone’s memory and service with honor. On this unique American holiday we mustn’t forget the prices paid for our freedom,” said Emery.

Wright State Army ROTC cadets raise the American flag in observane of Memorial Day, May 25, 2012 at Founders’ Fountain on campus.