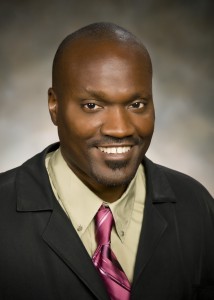 Opolot Okia, Ph.D., director of the African and African American Studies Program in the College of Liberal Arts.

Opolot Okia, Ph.D., is an author and Fulbright scholar who has demonstrated an outstanding commitment to excellence in teaching, research, and service since he joined Wright State in 2009.

The new director of the African and African American Studies Program in the College of Liberal Arts, Okia has developed innovative upper-division history courses, has gained recognition as a scholar, and has made important contributions to the college and the wider community.

Okia’s ambitious research agenda has made him an internationally recognized expert on the history of Colonial Africa and stands poised to have a monograph on colonial Africa history published by a major press. His research, which focuses on labor issues in Kenya, has resulted in publication in several prestigious journals including the International Journal of African Historical Studies, the Journal of Imperial and Commonwealth History, and the Journal of Cultural Studies, among others. Okia has a book contract for his manuscript, Communal Labor in Colonial Kenya: Legitimizing Coercion, 1912–1930 and is regularly asked to publish book reviews in a range of scholarly journals. Prior to coming to Wright State, Okia served as a Fulbright scholar at Moi University in Kenya.

Okia has also made major contributions in the classroom. Known as an innovative teacher with a down-to-earth personality, Okia is committed to continuous improvement of his teaching and developing strategies. Okia regularly teaches a General Education undergraduate course, which aims to dispel myths about Africa, but he has also developed several new upper-division history courses as well.

Though he has served on three M.A. thesis committees and several college and university committees, he recently assumed his most significant service position to date when he became the new African and African American Studies Program director as an untenured assistant professor.