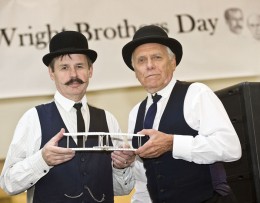 A student organization, the Wright State Chapter of the American Marketing Association, organized the event that took place from 11 a.m. to 3 p.m. in the Student Union Atrium to make the campus community more aware of the university’s namesakes.

Dawne Dewey, head of University Libraries’ Special Collections and Archives, was the event’s keynote speaker. She said the university’s Wright Brothers Collection details not just their invention of the airplane but also their personal lives.

Tony Sculimbrene, executive director of the Dayton-based National Aviation Heritage Alliance, thanked the Marketing Club for promoting the Wright brothers’ aviation heritage and cited their project as an example of the importance of marketing. “We are pleased the Marketing Club has chosen to take the Wright brothers’ story to the people,” he said.

Wright Brothers Day marks the anniversary of Wilbur’s 39-minute flight on Huffman Prairie in 1905, an epic feat that showed they had advanced their design to the point of a practical airplane.

The marketing club scheduled its event a day early because the Atrium was unavailable on Oct. 5.

Roger Storm and Tom Benson of NASA as Orville and Wilbur Wright.

Amanda Wright Lane, great-grandniece of the Wilbur and Orville, with Tom Benson (left) and Roger Storm of NASA.