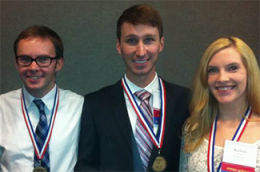 The questions test medical students’ knowledge on uncommon or rare syndromes in internal medicine. “Knowing the correct answer is important, but being able to buzz in before other teams is equally as important,” Bacon said. “Sometimes you have to buzz in off of a few key words before they finish the question. Otherwise another team will beat you to it.”

Glen Solomon, M.D., chair and professor in the Department of Internal Medicine and Internal Medicine Residency Program director at the Wright State University Boonshoft School of Medicine, applauded their victory. “It shows how academically prepared Wright State medical students are compared with their peers at other medical schools,” Solomon said. “On virtually any measure, our students are at the top of their profession. Winning a statewide contest just helps to validate the exceptional quality of our medical students.”