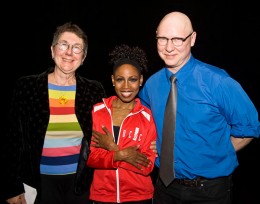 Sparkle, a short documentary by celebrated Wright State filmmakers Julia Reichert and Steven Bognar, will be shown on national television early next year. The film will air on PBS at 9 p.m. on Feb. 7 as part of as part of the network’s new series, Lifecasters.

Jennifer Lawson, senior vice president of television and digital video content for the Corporation for Public Broadcasting, announced Sparkle’s television debut at the film’s Dayton premiere. Held at the Dayton Art Institute, the evening included performances by Williams and DCDC, as well as a question-and-answer session with the filmmakers.

Creating this documentary was no easy task. With a crew composed mostly of Wright State film students and alumni, Reichert and Bognar followed Williams through her months-long recovery process. The film offers audiences a rare behind-the-scenes look at DCDC’s rehearsals and performances.

Earlier this year, Sparkle won the Audience Award for Best Short Documentary at SilverDocs, the largest documentary film festival in the United States.