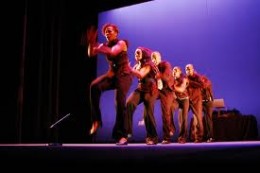 Founded in December 1994, Step Afrika! is celebrated worldwide for its efforts to promote an appreciation for stepping and the dance tradition’s use as an educational tool for young people.

The Wright State University community is preparing for a step show unlike any other that’s been performed on campus. Step Afrika!, a dance company from Washington, D.C., is poised to deliver a free performance and history lesson Tuesday, Feb. 5, from 7 to 9 p.m. in the Student Union Apollo Room.

“This is probably one of the premier dance troops in the world that actually promotes the use of stepping,” said Andrew-Bryce Hudson, assistant director of the Bolinga Black Cultural Resources Center. “They do a great job sharing the history behind this African tradition and how it has immigrated to the United States, where we see it now with traditionally black fraternities and sororities.”

According to the dance company’s website, Step Afrika! is the first professional company in the world dedicated to the tradition of stepping.

“They take you through the history from Africa, to slavery, to the modern iterations of the dance,” said Hudson. “So it’s kind of like a history lesson and a performance.”

Founded in December 1994, the dance company is celebrated worldwide for its efforts to promote an appreciation for stepping and the dance tradition’s use as an educational tool for young people.

Step Afrika! reaches tens of thousands of Americans each year and has performed on many stages in North and South America, Europe, Asia, Africa and the Caribbean.

The company completes an annual 50-city tour of colleges and theaters from Maine to Mississippi and is a national model for the use of stepping in education, espousing themes such as teamwork, academic achievement and cross-cultural understanding.

Step Afrika! is a frequent partner of the John F. Kennedy Center for the Performing Arts and the Washington Performing Arts Society and has graced some of America’s most prestigious stages from the White House to the Lincoln Center in New York City.

This event is sponsored by the African Student Union, Residential Community Association and the Bolinga Black Cultural Resources Center.