Political science experts team up for book on corruption 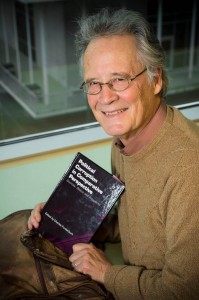 Political science professor Charles Funderburk with the book Political Corruption in Comparative Perspective, which he and six other faculty members partnered to produce.

In the end, seven Wright State faculty members partnered to produce Political Corruption in Comparative Perspective, a collection of case studies published in 2012 after nearly three years of work.

“It was really good for our department,” Funderburk said. “An exercise in camaraderie came out of it. And the nice thing about working with colleagues here at Wright State is that they were just down the hall where I could bang on their door and ride herd on them.”

Funderburk said there have been previous efforts to write all-encompassing books about political corruption, but that he wanted authors who were familiar with specific areas. The book moves from one country to another using a common framework

“Certainly I hope it will spark some interest in the subject and a slightly different way of looking at it, perhaps a little more broadly conceptualized,” he said. “Ideally, I’d like to see enough interest to produce a paperback. Then more people can read it.”

Writes Funderburk: “Consequences of widespread political corruption for societies include lower rates of economic growth, slower development of economic and political institutions, widespread cynicism and alienation among the populace undermining the legitimacy of the state, and in some cases political and social instability.”

Funderburk said he was especially interested in analyzing the kinds of things that could be viewed as corrupt but have been legalized and institutionalized such as large campaign contributions and earmarks, legislative provisions that direct funds to be spent on specific, often parochial, projects.

“Often when you start introducing these earmarks for special interests, money really flows that way,” he said. “It’s not that hard to find overtly corrupt examples of congressmen and senators who, in the guise of earmarking legislation for special needs, end up essentially on the take.”

Funderburk has spent the past 40 years at Wright State. He plans to retire in June.

“I’ll still be lurking the halls. I’ll be teaching a course in the fall, and I suspect that for probably several years I’ll teach part time,” he said. “But it will be nice to slow the pace down.”

The slowdown will enable Funderburk to spend more time with his other passions, such as reading.

He favors Elmore Leonard, who originally wrote westerns and moved on to suspense thrillers and crime fiction such as Get Shorty. He also enjoys reading journalist Carl Hiaasen, whose novels are set in Funderburk’s native Florida, and Randy Wayne White, who has written several novels with Florida’s Gulf Coast as their backdrop.

“And I’ve got a guitar I hack on from time to time,” Funderburk added.