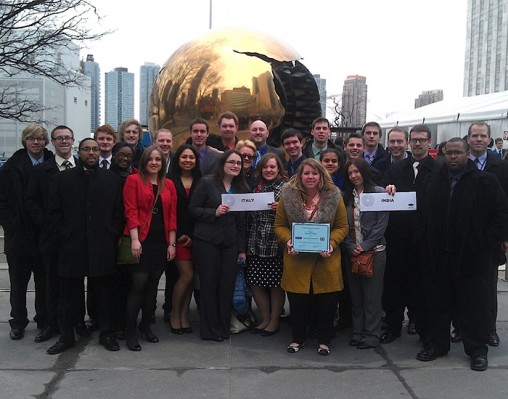 Wright State University’s Model UN team continued its remarkable streak at the National Model United Nations Conference, receiving the highest recognition possible at the competition for the 34th year in a row.

Competing against 149 universities around the world, Wright State was one of 20 colleges to receive Outstanding Delegation recognition.

Students on the following committees were named Outstanding Delegates in Committee by their peers: Economic and Social Council, Commission on Crime Prevention and Criminal Justice, UNICEF, Habitat and Security Council.

This year’s team represented Italy, with one student serving on a Security Council team representing India. During the conference, students represent their designated country and produce resolutions by working with students from other teams.

“This program truly helps us educate globally aware, engaged students who know how to collaborate to solve problems,” Schlagheck said. 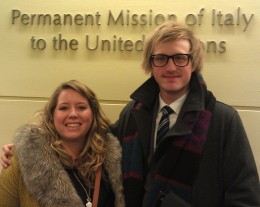 Head delegates Andrea Jacoby and Kuyer Fazekas and other members of the Model UN team visited the Italian Mission to the United Nations.

Andrea Jacoby and Kuyer Fazekas, the 2013 team’s head delegates, led the preparation on campus as well as Wright State’s team at the conference.

Because Italy plays a significant role in the European Union, Jacoby said, Wright State delegates focused on connecting Italian policies with EU policies in the papers the team submitted for the conference. The team also performed in-class UN simulations and participated in several local conferences with area universities.

“The National Model United Nations Conference does such a good job of providing international students opportunities and blending an educational setting with real-life situations,” Jacoby said. “All the universities do such a good job of training their delegates that they truly challenge our delegates and everyone is forced to truly think outside the box to provide the best answers to their topics and write stellar resolutions or reports.”

Preparation for the conference involved more than writing papers and learning a country’s policy.

“Throughout the semester, we teach our delegates how to implement Italian policy, how to dress, how to act in committee, and what to expect from other countries they will be working with in committee,” Jacoby said.

While in New York for the competition, the team also met with the legal advisor to the Italian Mission. “He gave us such great insight to specific areas within Italian policy and how it relates to the EU and the UN,” Jacoby said.

Jacoby said Model UN helps student improve their critical thinking and problem- solving skills. “The MUN team has prepared me for so much,” she said. “It has made me a better writer, a better public speaker, and established strong leadership skills.”

But the influence Model UN has had on Jacoby’s life goes far beyond campus.

“Model United Nations changed my life,” she said. “It is such a great educational experience, but also a great real-life experience. Model UN opens doors that I could not have even imagined being provided during my college career. It has created a new passion in my life for how my skills can change the world.”