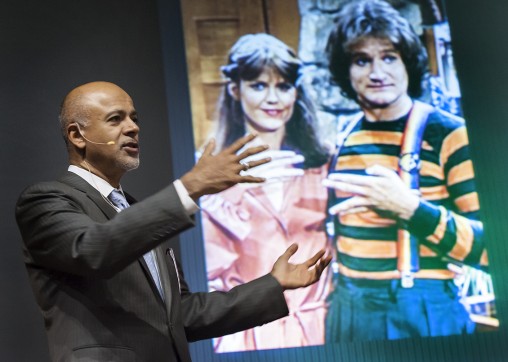 Best-selling author Abraham Verghese, M.D., was a speaker at this year’s Annual Medical-Spirituality Conference: “Patient-Centered Care” and keynote speaker at the annual Academy of Medicine Distinguished Guest Lecture and Dinner Meeting, attended by more than 240 friends of the Boonshoft School of Medicine.

This simple phrase is woven like a thread through the tapestry of physician and best-selling author Abraham Verghese’s life and his work.

Abraham Verghese, M.D., MACP, professor for the theory and practice of medicine at the Stanford University School of Medicine and senior associate chair of the Department of Internal Medicine, was the keynote speaker at the recent Academy of Medicine Dinner to support scholarships for the Wright State University Boonshoft School of Medicine.

Verghese is the author of My Own Country: A Doctor’s Story chosen as a Best Book of the Year by Time magazine and the best-selling book, The Tennis Partner: A Story of Friendship and Loss.

Verghese was born in 1955 in Ethiopia of parents who came from a community of Christians in southern India that traced their roots back to St. Thomas the apostle. His parents, both physics teachers, were recruited to teach in Ethiopia where they met and eventually married.

Like many parents, Verghese’s parents had high expectations for their children. Growing up in a middle class Indian family, “you recognize very quickly that your options in life are you can be a doctor, a lawyer, an engineer or a failure,” Verghese said.

Verghese decided at a young age that he would become a physician, but he hadn’t felt the calling yet. “I was a very indifferent student. I had terrible grades in school,” he said. “But I was a precocious reader. I picked up a book, which was to change my life. The book was Of Human Bondage by W. Somerset Maugham.”

The story of an orphan, Philip, who fails at his dream of becoming an artist but finds his calling in medicine resonated with Verghese. The book “suggested to me that anybody could become a great physician if they have an innate curiosity about the human condition—if they have an innate empathy for their fellow human beings and if they had a willingness to work hard. And that was the moment I decided to become a physician.”

He began his medical training in Ethiopia but it was interrupted by war. He eventually competed his medical education in India and came to the United States to train in infectious disease in Boston. It was there he first saw the disease that would change his life.

“When I was in Boston I had first begun to see young men coming in with bizarre infections,” he said. “We’d seen these infections before but always in the context of immune suppression. It was clear this was a brand new disease.” The disease was AIDS.

He left Boston in the late 1980s to become an assistant professor of medicine in Johnson City, Tennessee, a small community nestled in the hills of eastern Tennessee.

AIDS in the heartland

“When I got to Tennessee, all the experts told me that I could expect to see one HIV case every other year because AIDS is very much an urban phenomenon,” he said. “Instead, within two or three years I had a hundred people with HIV in a town of 50,000, which was a hundred fold more than anyone had predicted for that population.”

He realized he was actually dealing with two diseases. “I was dealing with the virus and everything that the virus can do,” he said. “But I was also dealing with the second disease, which was the stigma of what it meant to have HIV in a small town like that. That shame and secrecy that went with HIV was almost bigger than the disease.”

He had stumbled onto the phenomenon of migration, which he realized was happening in small towns all across America. Young people often leave small towns for many reasons such as jobs, education or opportunity. But in this case, they were leaving because they were gay.

“And so they made their ways to the big cities and they found themselves,” he said. “But tragically somewhere along the way the virus found them. They were now coming back to their hometowns because they were sick and their partners had died and there was no one to take care of them.”

One patient who had grown up in Johnson City left a special impression on him. “He remembered walking through the schoolyard when he was seven and his brother was nine and his brother turning to him and saying ‘must you walk that way?’ It was a big moment for him,” said Verghese. “He was not aware that the way he walked was different from the way the rest of the world walked.”

As an adult, he found his way to San Francisco where the way he walked and his sexuality did not attract attention. “He had a wonderful life there,” said Verghese. “And then one morning he woke up with severe chest pain.”

He was found to be HIV positive. “It was a long, protracted admission,” Verghese said.  When he came out his job was gone, he’d been evicted from his apartment, all his belongings were in the basement of a friend’s apartment—a friend who was also sick and in the hospital.

“So he made the one call he must have dreaded to make to his parents to say I have AIDS and I’m coming home,” Verghese said. When he arrived home in Johnson City, he became Verghese’s patient.

“I got to know him,” Verghese said. “But this was the days we really had nothing to offer these patients.”  Months later, he was hospitalized with a fever that wouldn’t break.

On the third day he told Verghese he wanted to go home. “I couldn’t argue with him, so I let him go home,” Verghese said.

When he died, Verghese went to his home in Bristol, Tennessee, where he lived with his parents, a pastor and his wife. “As I walked into his house, his parents were weeping on the couch,” Verghese said. “I went into his bedroom, and I was so struck by the sight of his body. He looked so Christ-like. There was something about his him that was the picture of suffering.”

Verghese realized the patient had died in his childhood bedroom. “I could suddenly see this whole image of this child having grown up in this room,” he said. “Having grown up with lots of love and yet feeling as if he were an alien in that town at that time because of his sexuality. In fact, I was more at home in that town than he would ever be.”

That night, Verghese went home and drafted a scientific paper for the Journal of Infectious Diseases, that was one of the first to describe this phenomenon of migration.

Verghese went on to become a best selling author with a dream of doing for a generation of college students what Of Human Bondage had done for him, which is bring them to medicine with a sense of passion and purpose. “And so it was very gratifying to write Cutting for Stone and see it do so well,” he said. “I don’t mean by sales or the best seller list, I mean precious, precious letters I get from college students who say this is the book that’s bringing me to medicine, which to me is absolutely priceless.”