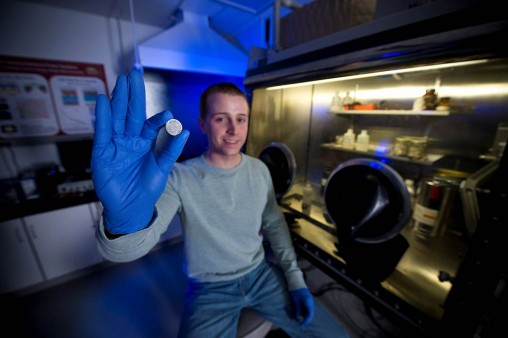 Aaron Blake’s interest in batteries was sparked after helping his advisor research topics related to lithium-ion electrodes. He picked up and helped continue research into the development of a long-lasting lithium-sulfur battery as part of a senior design project.

Game Boys were fun. The handheld devices offered baseball, Tetris, Super Mario and other Nintendo video games. But the batteries died quickly, often draining in a single day. That always bugged Aaron Blake when he was a kid—and it planted a seed in his mind.

Today, Blake is a student at Wright State University conducting graduate-level research on batteries in hopes of producing a super battery that can provide nearly inexhaustible power to electric cars, laptop computers, cellphones and other equipment that require energy storage devices.

“There’s got to be a solution,” said Blake. “I want to do something that impacts the future in a positive way.” 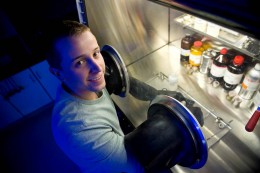 Blake is pursuing a master’s degree in renewable and clean energy and a Ph.D. in materials and nanotechnology.

Blake spends much of his time in Room 217 of the Russ Engineering Center. The tiny lab sports an argon-filled glove box where batteries are built, a station where they are tested and several presses to punch out electrodes in the shape of tiny coins.

Blake landed at Wright State’s College of Engineering and Computer Science in a roundabout way.

Math was not kind to Blake in grade school. He admits he wasn’t very good at it. But at Springboro High School, Blake fell in love with mathematics. Teachers saw his potential and encouraged him. He began to enjoy friendly math competitions with his classmates. During his junior year of advanced algebra, he caught the fever for good.

“Ever since then, I loved sitting down and working out math problems,” he said.

However, Blake wasn’t quite sure how to apply his love for math with a career. He enrolled at the University of Dayton as a pre-dental major, but it wasn’t a good fit for him. So he transferred to Wright State into the engineering program, which he loved because he was exposed to mechanical, electrical, materials and every other discipline of engineering.

“I was scared at first because I was trying to jump in and work at the second-year level,” he said. “But the professors here are fantastic, and the advising here is phenomenal. That made me very comfortable and helped me progress.”

In his senior year, Blake’s interest in batteries resurfaced when he learned that his current academic advisor was conducting research on electro-chemical energy storage devices. After helping his advisor research topics related to lithium-ion electrodes, he picked up and helped continue research into the development of a long-lasting lithium-sulfur battery as part of a senior design project.

Today—while pursuing a master’s degree in renewable and clean energy and a Ph.D. in materials and nanotechnology—he’s working on developing exactly such a battery.

“It’s a battery that offers the highest theoretical energy density and specific capacity of any two solid elements,” Blake said. “It’s promising because sulfur is a very abundant material, so it’s really cheap.”

Currently, lithium-ion batteries are commonly used in electric cars. However, automakers have said that the weight and high cost of the batteries is preventing the spread of electric cars beyond a small number of urban commuters.

“So developing a battery based on the lithium-sulfur couple and making it a realistic technology would be tremendous,” Blake said.

He is currently tackling the chemical challenges of such a battery.

Once a lithium-sulfur battery is discharging, the sulfur begins to form long polysulfide chains, which become soluble, begin to dissolve and weaken the battery. So Blake is working on combining the sulfur with graphene—pure carbon in a one-atom thick sheet—to try to keep the sulfur from dissolving.

“The toughest part is that I’m working with materials at the nanoscale—something you can’t see—so you have to imagine it,” he said. “You have to really understand the area which you’re researching, apply what you’ve learned in these classes, what you’ve read in other research, and try to figure out what’s going on. I enjoy doing that. It’s very fulfilling.”

Blake’s research is sponsored by a National Science Foundation grant, which was also used to create a new class for students called Experimental Nanomaterials and Nanoscience.

“The whole point of this is to prepare undergraduate and graduate students for the emerging field of nanotechnology,” he said. “The field is growing and will become a large sector of business.”

When he is not studying or conducting research, Blake enjoys playing the guitar and the piano and occasionally picking up a book. He just re-read Frankenstein, the Mary Shelley novel about a creature produced by an unorthodox scientific experiment.

But most of Blake’s time is spent in the classroom and the lab, pursuing his battery-power dreams.

“I hope to make this a realistic battery,” he said. “If we can do that, we can make electric vehicles an affordable reality.”