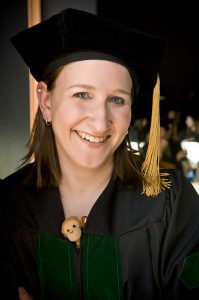 For Casey McCluskey, the path to obtaining her medical degree has been a circuitous journey.

After graduating from the University of Notre Dame in 2001 with a bachelor’s degree in English and film, television and theater, she earned a master’s degree in education while teaching through a two-year post-graduate service program. She was placed in an under-resourced elementary school in Mississippi. “It was probably the hardest thing I’ve ever done,” she said. “I learned a lot of life lessons with 25 kids relying on me.”

She returned to her hometown of Akron, Ohio, to teach K-8 technology at a Catholic school for a few years. She also spent a summer teaching English to fifth-grade children in Ethiopia.

But she realized that she wouldn’t be happy teaching for an entire career like her mother, aunt and brother. “I didn’t think I could sustain the enthusiasm I had for a teaching career. I had always thought about medicine. But I didn’t know if I wanted to make the commitment,” said McCluskey, whose father is a family physician. “If I hadn’t pursued medicine, I think I would have wondered if that’s what I should have done.”

So, in the fall of 2008, McCluskey started her first year of medical school at the Boonshoft School of Medicine. Active in her class, she volunteered at Reach Out of Montgomery County, an organization that provides the underserved and uninsured with access to health care.

“I loved the opportunity to work with patients during my first two years when it seemed like all we did was bury our heads in books,” she said. “It was a great reminder of why I actually went into medical school. It also was a great opportunity for medical students to work one on one with local physicians and learn from them.” 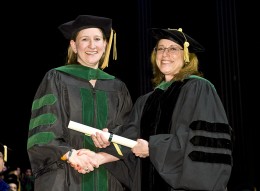 After leaving a career in teaching for medicine and beating cancer, McCluskey graduated from the Boonshoft School of Medicine in May.

However, by the end of her first year of medical school, McCluskey faced an unexpected hurdle. She was diagnosed with a malignant breast tumor. In the summer of 2009, she had a mastectomy, followed by chemotherapy.

“It’s the best class I ever took in medical school,” McCluskey reflected on her experience as a cancer patient. “My experience also helped me understand the sanctity of the relationship between a doctor and a patient. I literally put my life in the hands of my doctors and trusted that they were doing the right things to take care of me.”

When she returned to medical school in the fall of 2009, she was behind her class because she had missed several weeks. So she retook her first year and joined the class of 2013. McCluskey jumped back into her activities and helped at Reach Out of Montgomery County, where she also served as a Reach Out board member.

A leader in her class, McCluskey participated in training activities throughout medical school that fostered the team approach in patient care. She was a cohost on Radio Rounds, the first and only radio show in the United States that is hosted and produced entirely by medical students. She also was a speaker in the “Social and Ethical Issues in Medicine” course. She served as co-director of “Finding Meaning in Medicine,” a medical student group that discusses the purpose and meaning of medicine. She volunteered as part of a service-learning elective in New Orleans to help restore houses.

She volunteered with Weekend Intervention Program, a driver intervention program for substance abuse clients. She served as president of the local chapter of Physicians for the Human Rights. She is a member of Phi Rho Sigma Society, a national social and community service organization. She collected food for the Boonshoft School of Medicine Canned Food Drive, which provides food to local food pantries.

She also began talking about her experience as a cancer patient and continues to educate young women about breast cancer awareness. She spoke at an American Medical Student Association (AMSA) national convention on the topic of “Medical Student as Patient: Lessons Learned from Breast Cancer.”

“I am humbled by Casey’s continual efforts to meet the needs of those with whom she comes into contact,” said Gary LeRoy, M.D., associate dean of student affairs and admissions. “She is compassionate and driven to make life better for children and adolescents.”

The U.S. Public Health Service (USPHS) took note of her compassion and commitment to public health. Geoffrey M. Calvert, M.D., M.P.H., a Boonshoft School of Medicine alumnus, class of 1983, and an active duty officer in the USPHS, will present McCluskey with the 2013 Excellence in Public Health Award before the medical school’s graduation ceremony. The USPHS award recognizes medical students who are involved in public health issues in their communities.

“I am going into pediatrics, and I think the foundation for that pathway was laid down before I started medical school,” said McCluskey, who will begin her residency at the Indiana University School of Medicine in Indianapolis. “My years of teaching helped me get to know children and understand who they are and how they think.”

One of the biggest things being a teacher taught her to do is break down information for patients in simpler ways so they can have a better understanding of their illnesses and treatments. “The more patients understand what is going on with them, the more motivated they are to take care of themselves,” she said. “I may have left the classroom, but I will always consider myself a teacher.”

“Adolescents are walking that fine line between childhood and adulthood. It takes patience to help them navigate this world,” McCluskey said. “They need to be given enough trust and responsibility, while at the same time, still be allowed to be a child again. They are a fascinating group that is often neglected in medicine.”