A high school student who plans to become a teacher and work with disabled students will receive four years of tuition to Wright State University after being selected as the winner of the eighth annual Dayton’s CW Scholarship contest. 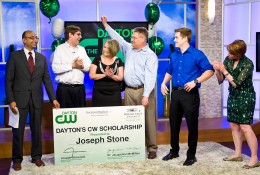 Joseph Stone (second from left) and his family celebrate after learning he won the Dayton’s CW Scholarship to Wright State.

Joseph Stone, who attends Centerville High School, and his family learned he won the award during a surprise ceremony at the studios of the Dayton’s CW and WDTN on June 18.

He was selected based on his 500-word essay on “Who or what experience influenced me to choose my major/field of study?”

Stone, who is dyslexic, plans to study early childhood development in the College of Education and Human Services. He wants to be a teacher, he said, so he can help “kids like me with dyslexia and other disabilities who have trouble in school like I did.”

Stone did not know he was dyslexic until he went to the Huntington Learning Center during his freshman year of high school. He said it was difficult for him to fit in at school, and he would often feel isolated and get frustrated with his schoolwork.

“At some points I felt like giving up, but I kept pushing through it,” he said. “It was a painful process and I want to make it easier for kids like me to get through the schoolwork.”

Wright State has always been Stone’s college of choice. “I picked the school mainly because of their great special education program,” he said.

Stone’s desire to help others change their lives fits perfectly with the goals and mission of Wright State, said Amy Barnhart, the director of the Wright State Office of Financial Aid.

“Wright State transforms the lives of our students and the communities we serve,” she said. “Because of this scholarship award, Joseph will have a chance to fulfill his dream of becoming a teacher and helping others.”

Joe Abouzeid, president and general manager of WDTN-TV and Dayton’s CW, said those involved in the contest were moved by Stone’s commitment to help young people who feel isolated and alone.

“One of the most important things we can do as a television station is be a great community partner,” he said. “Part of that commitment means doing what we can by working with great partners like Wright State to literally help change people’s lives when we can. And this is a great example.”