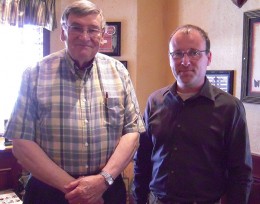 Jim McCoy (left) was inspired to increase his support for a Wright State art scholarship after receiving a thank you letter from James Kidd, who recently graduated.

A simple but moving letter of thanks inspired one Wright State University donor to increase his support for the university’s art program.

Jim McCoy provides financial support to an outstanding Wright State art student each year through the Joan W. McCoy Memorial Art Award. He recently decided to double the amount of the scholarship after receiving a thank you letter from recipient James Kidd. The letter brought tears to McCoy’s eyes—and still does when he reads it.

“He encouraged me to do it and he didn’t even know it,” McCoy said of Kidd.

The letter also helped McCoy to better understand how important it is to support Wright State students. “I didn’t realize how much it meant,” McCoy said.

Kidd wrote the letter after meeting McCoy for the first time over lunch. McCoy said he was impressed with Kidd and was moved by the tone of his words.

“For him to take the time to write a thank you letter of that nature was admirable,” McCoy said. “I think artists have a difficult time evolving and making a living, and here he was trying to do that.”

Kidd worked as an ecologist after receiving a degree in environmental studies from Evergreen State University in Washington State. He then was a stay-at-home dad for nine years. After he and his wife divorced, he enrolled at Wright State to study art. He raised his three children while pursuing his degree.

While he hopes to find success as an artist, he is more interested in being accessible to his children and being happy.

McCoy started funding an annual award to a Wright State art student about seven years ago. He has pledged to continue providing funds for at least the next five years and is considering including the scholarship in his will.

“Powerful connections between a donor and recipient can help make their philanthropy real,” said Kristin Sobolik, dean of the College of Liberal Arts. “Whether it’s $500 or $500,000, donors can change somebody’s life.”

Kidd, who graduated in April 2013 with a B.F.A. and a concentration in sculpture, said McCoy’s generosity and support not only helped him financially, but also motivated him as a student and artist.

“I wanted to repay him through my hard work,” Kidd said. “I didn’t want to let him down.”

McCoy established the Joan W. McCoy Memorial Art Award in honor of his wife of 48 years, who died in 2003. Through the award, he supports various artists, art instructors and arts organizations.

An award-winning painter and potter, Joan taught art at Wayne High School for 30 years, and served as first docent at the Dayton Art Institute for six years. She received an M.A. in education from Wright State in 1977.

Jim McCoy, who is now retired, worked for a number of businesses in sales and management and started two companies. He started painting during an art vacation he and Joan took in Spain near the end of her life. Because he didn’t want to be stuck inside their hotel room while Joan was out painting with the other artists on the trip, he picked up a brush for the first time in his life.

After Joan died, McCoy went on a three-month camping and painting trip out West. During the trip he was inspired to celebrate her memory by establishing the art award.

“Her influence on me is so great,” he said. “It will benefit artists and their instructors for some time to come.”

In addition to the McCoy award, Kidd received an ArtsGala scholarship and was recognized by the College of Liberal Arts as the 2013 Outstanding Senior in Art and Art History.

During the Spring Semester, he served as a Yeck College Artist Fellow at the Dayton Art Institute (DAI), where he mentored high school students. He has three pieces on display at the DAI this summer and has exhibited at the Dayton Visual Arts Center and in Wright State’s Senior Thesis Exhibition.

Combining his interest in environmental issues, his sculptures often incorporate wood and other natural elements with concrete and found objects. He continues to build his body of work in his home studio in Yellow Springs, Ohio, and is setting up studio space in Dayton.