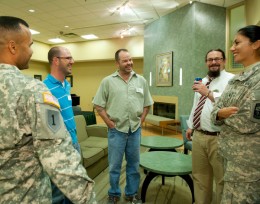 The Office of Veterans Affairs hosts a number of events throughout the year, including a meet and greet during the second week of school.

Wright State University has been recognized as a top university in Ohio for students interested in military service.

According to rankings released Aug. 15 by The College Database, Wright State ranks in the top five public, four-year colleges and universities in Ohio for future service members, with an affordable annual tuition rate and ROTC programs for both the Army and Air Force.

“Everyone talks about service members using their GI Bill to go back to school, but rarely do people discuss current students using college to join the service,” said Wes Ricketts, vice president and general manager of The College Database. “Colleges with ROTC programs give students a great opportunity, not only to explore military service, but to gain valuable leadership skills coveted by employers.”

The College Database is a not-for-profit organization whose goal is to provide free information about educational options both nationally and locally to students and parents.