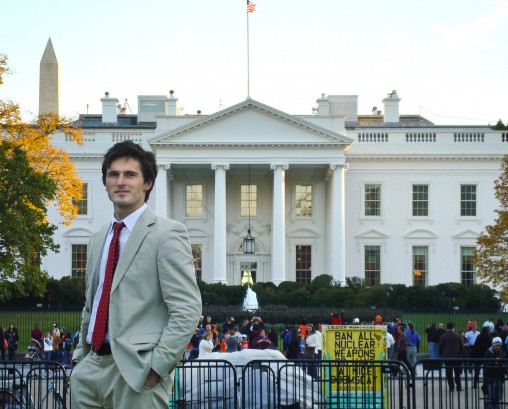 During his internship at the White House, Jake Schierloh ’12 managed programming for his fellow interns and assisted potential internship applicants from across the country.

Recent Wright State University graduate Jake Schierloh was preparing to attend graduate school in London. But he put those plans on hold when a once-in-a-lifetime opportunity came up: an internship at the White House.

Schierloh, who graduated with a B.A. in political science in 2012, was one of nearly 150 college students or recent graduates who participated in the White House Internship Program this summer.

The internship provided him with valuable hands-on management experience, including planning events and assisting applicants for future internships. He described the experience as humbling and thrilling.

“I’ve always been a strong advocate for public service, especially in the last couple years when I’ve gotten more involved in politics,” he said.

Working in the White House Internship Office within the Office of Management and Administration, Schierloh was responsible for managing programming for his fellow interns and educating potential applicants from across the nation about the Internship Program.

Every day at the White House was different, he said.

The internship strengthened his interpersonal, time management and organizational skills, and provided an invaluable experience.

The White House Internship Program is highly competitive and selective. Applicants are required to submit a resume, two essays and two letters of recommendation. Interns work full-time and are not paid.

The program’s mission is to make the White House accessible to future leaders around the nation and to prepare those devoted to public service for future leadership opportunities.

Schierloh said his education at Wright State thoroughly prepared him for his internship. “The Wright State Political Science Department has enabled me with the knowledge, confidence and skillset to excel anywhere,” he said.

A number of political science professors, he said, “went above and beyond” for him, including Liam Anderson, Charles Funderburk, December Green, Paul Leonard, Donna Schlagheck and Vaughn Shannon.

After graduating from Wright State, Schierloh had been preparing to attend graduate school at the University of Westminster in London. He also was involved in local politics by working on A. J. Wagner’s campaign for Dayton mayor and had spent time at local nonprofit organizations.

Now that his internship has concluded, Schierloh plans to resume preparing for grad school and exploring career opportunities.

He eventually hopes to land a public-service position in which he can help others and humanitarian causes. He is also interested in teaching someday at the college level.

“I would love to inspire future students the way I was inspired at Wright State,” he said.