’03 Alumna, radio host back in Dayton 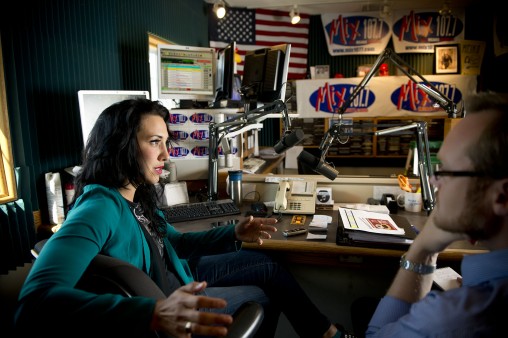 Gina Ferraro is back at home in the Mix 107.7 recording studio in Dayton’s Oregon District.

Radio listeners across the Miami Valley have welcomed an old friend back into their lives. Gina Ferraro is again on the radio airwaves, but this time with Mix 107.7 in Dayton.

Ferraro (class of 2003) made a name for herself in Dayton, before leaving six years ago for opportunities in Chicago. Though she thrived in the Windy City, the New Knoxville native always had a warm spot for her radio colleagues and listeners back home.

“When this position came available, they asked if I was interested in the morning show co-host position, which required a return to Dayton and I knew I would love working with these guys (co-hosts Dave and Jeff). Really, the stars just aligned for me to come back,” said Ferraro, who returned to the Dayton airwaves July 1. “I am having so much fun with these guys now and I’m really happy to be back in Dayton.” 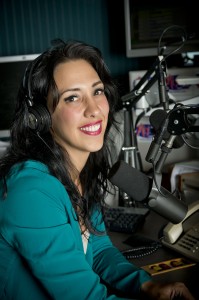 Gina Ferraro returned to the Dayton airwaves July 1 as a co-host of the The Mix Morning Show with Jeff, Gina & Dave weekdays from 5 to 10 a.m. on Mix 107.7.

Ferraro, Dave Alexander, co-host and news director, and Jeff Stevens, co-host and mix program director, are the hosts of The Mix Morning Show with Jeff, Gina & Dave weekdays from 5 to 10 a.m. The station plays hot adult contemporary music, but the morning show is just as much about improvisational conversation and listener interaction as it is about playing the latest Robin Thicke single.

“We try to apply our real-life experiences that are relatable to the audience,” explained Ferraro. “Hopefully we can strike an emotional chord with somebody and get them to pick up the phone or tune in the next day.”

A Wright State student in the early 2000s, Ferraro never expected to find a home in radio even though she was a mass communication major.

“I didn’t find radio until after college. My whole thing back then and even in high school was I just wanted to be famous. How? I didn’t know,” said Ferraro.

Ferraro interned with Kayos Productions, a publicist in New York City, before her senior year, but realized it wasn’t a good fit for her. While she was working promotions with the Dayton Bombers, she was approached for an internship with then 103.9 The X and the cluster of Clear Channel stations based in the Oregon District. After several months, her hard work paid off and she was asked to host an overnight weekend show on The X.

“That first on-air job, it was like the movie Cocktail; they just threw me behind the bar and told me to start mixing drinks,” said Ferraro. 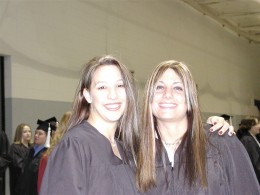 Ferraro and classmate Katie Edwards-Lee before Commencement in Dec. 2003.

Ferraro proved plenty capable of learning on the job and was promoted quickly. Many listeners will remember that Ferraro began co-hosting a popular weekday morning show in 2003.

In 2005, Ferraro left The X to co-host mornings on Channel 94.5’s Morning Mess. After two years with “The Mess” she left and signed her first radio contract with rock station Z-93 (92.9) in 2007. A format change and mass layoffs soon followed and led her to take a news reporting position with WHIO radio. Several months later she decided to take a job in Chicago. While there, she worked as a host of a television show that broadcasted on FOX MyTV from a tattoo parlor for 30 episodes, reported for Chicago’s NBC 5 show called Nude Hippo, and as co-hosted for radio stations US99.5, talk format WGN and LITE 93.9.

“Every step along the way I put something in my little bag of skills,” said Ferraro. “I always tried to learn something, tried to watch or listen to myself critically and was always asking for feedback.”

Now she’s using her wide array of experiences to drive conversation in a career she’s surprised to be thriving in.

“I never thought of radio, and I never did radio in college. I had this preconceived view that I wasn’t witty enough to be on radio, to drive conversation, to think of what to say next,” said Ferraro.

Ferraro shared some words of advice for Wright State students still searching for the career that fits them best.

“Follow your passion. Passion is something that cannot be taught, and future employers will see it in you,” said Ferraro.

“That being said, you’ve got to knock on literally every door. You have to create contacts. And you must send thank-you notes after interviews. I can’t tell you how many seeds I’ve planted that have come back.”

Visit http://www.mix1077.com/pages/mixmorningshow.html to check out the Mix Morning Show online.

Visit http://www.ginamarieferraro.net/ to learn more about what else Ferraro’s been up to since she graduated.