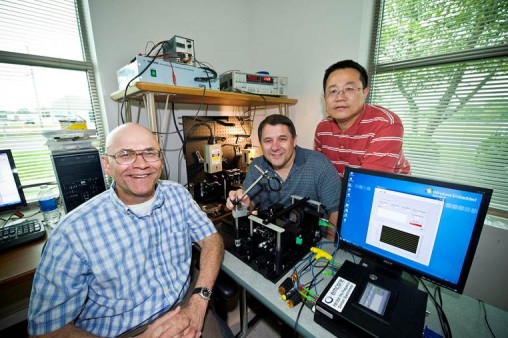 A new flu virus makes its first appearance in the United States on a restroom doorknob at an international airport in January. Before it can be positively identified by the Centers for Disease Control, the virus spreads throughout much of the country, leaving hundreds of thousands of people sick.

Sound familiar? Indeed, we have come to expect this scenario every year and call it an outbreak, or pessimistically, the “flu season.” And in spite of living in an age when the text of the entire King James Bible can be transmitted by a mobile telephone in roughly one second, there is no reliable way to directly detect the oldest of all biological threats to human life—the virus.

But there is hope. Cutting-edge technology under development by Wright State University researchers and field-deployable at public sites like airports has the potential to detect viruses within minutes, giving early warning and reducing  the possibility of an outbreak.

“We would be monitoring viruses in near real time,” said physics professor Elliott Brown. “This technology will allow us to detect the presence of viruses like the flu before an outbreak. It will give us predictive capabilities.”

The “technology” is a one-of-a-kind sensor that uses gigahertz-to-terahertz radiation to detect viruses captured in nanofluidic chips by measurement of their resonant signatures. Wright State along with Indiana University, biosensor company Redondo Optics Inc. and the University of Tennessee has won a three-year $625,000 National Science Foundation grant—with an option for an additional $130,000—to develop this new sensor technology.

Brown, Ph.D., Ohio Research Scholars Endowed Chair in Sensors Physics at Wright State, is an expert in terahertz radiation, which consists of invisible light waves in the electromagnetic spectrum higher in frequency than microwave and lower than infrared light.

The leaders of the project, which begins Oct. 1, plan to make the world’s first experimental GHz-to-THz measurements of virus signatures. The team is working closely with University of Indiana theoretical chemist Peter Ortoleva, who was the first to predict these signatures using very advanced computer simulations.

Ortoleva discovered that the capsid shells of certain viruses vibrate resonantly, even in their physiological (aqueous) state.  Working with Redondo Optics, Brown then predicted that such vibrations can be detected if the viruses are confined to nanochannels of fluidic chips, similar to the microfluidic chips that are now common in the biological-  and chemical-sensor industry.

Brown’s team—which includes post-doctoral research scientist Weidong Zhang and graduate researcher Leamon Viveros—will irradiate the virus shell components in the nanochannels with a beam of ghz-to-terahertz radiation, revealing a signature in the electromagnetic spectrum and providing a high level of confidence that the signature came from the virus and not some other biochemical.

Six years ago, working with a company named Emcore, Brown helped develop the world’s first frequency domain terahertz spectrometer, which operates with a very high resolution over a very broad tuning range in the terahertz spectrum. In the past six months, a compact, more sensitive version has been created that would be easier to deploy. It is the only one of its kind.

“Ultimately, if we’re going to put these sensors in every airport in the United States, they have to be fieldable and affordable,” Brown said.

Brown’s idea is to sprinkle the tiny nanofluidic chips with samples from an airport’s high-traffic areas, then capturing and detecting viruses as they first appear using a centralized, on-site spectrometer. The process is also faster than the current gold standard, Polymerase Chain Reaction.

“We’re going to turn back the clock and be able to predict the arrival of the flu weeks ahead of time compared to what we can do today,” he said.

The instrument currently costs about $50,000, but Brown is hoping that new technology and economies of scale will reduce it to below $20,000, making it more affordable for local governments or the Transportation Security Administration.

“The TSA is in the business of security big-time, and they pay for all kinds of instruments that are there at airports. Why not pay for instruments that monitor human-health threats?” Brown said. “In our thinking, disease is the next big threat that the Department of Homeland Security or the CDC needs to watch at airports.”

To test the technology, Brown’s team will first look at the Human Papilloma Virus, which is associated with cervical cancer and has been predicted by Ortoleva  to display a signature in the GHz-to-THz region. The team has partnered with GlasscoSmithKline—one of the biggest vaccine producers in the world and a leader in making vaccines for the HPV virus—to provide the virus components for testing.

The technology would also prove valuable in that it can be used to optimize vaccine production.  In addition, it would also provide clues in immunology by predicting and revealing what parts of the virus are recognized by the immune system.

A second key partner is California-based Redondo Optics, which will fabricate the nanofluidic chips. Redondo Optics would also likely commercialize the chips, but Wright State would be in control of the intellectual property, resulting in an estimated total annual revenue stream of up to $100 million, Brown said.

Winning such a grant from NSF in this highly competitive environment is a nod to Wright State’s capacity to do quality, high-level research. It paves the way for the university to seek bigger grants for related work from the National Institutes of Health and the Defense Advanced Research Projects Agency (DARPA), for example.

“We would like to start an NIH or NSF center for terahertz biological and biomedical sensors,” Brown said. “So the NSF project is like a stepping stone.”

Brown is confident that if successful, the outcome of this research will be a game-changer for the community and for science.

“This technology has the potential to revolutionize disease detection, vaccine R&D, disease monitoring and outbreaks of all sorts,” he said.