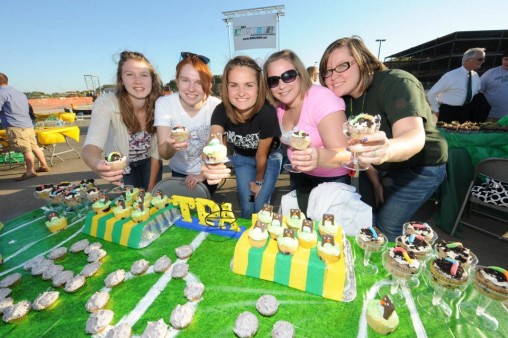 It was the spring of 2009. Instead of playing outside, swimming or kicking a soccer ball around, 7-year-old Ally Barnett was more interested in resting.

At the time, Ally was burdened with constant fatigue and would frequently complain of stomach aches and headaches. For Ally, a typically energetic little girl, her odd symptoms unsettled the parents, Jared and Janel, so they decided to contact their pediatrician. After being sent to Children’s Medical Center in Dayton, a few tests were done and sample of Ally’s blood was taken.

No one in the Barnett family could have prepared for what came next.

Thankfully the Barnett family could afford Ally’s hospital bills. However, they soon realized that other families are not as fortunate and struggle to pay cancer-related medical fees. The Barnett family then started Ally’s Army, a charitable organization that assists Dayton-area families struggling to afford the costs that come with bringing children with cancer back to health.

On Saturday, Sept. 28, at 5 p.m., the Wright State fraternity and sorority community is hosting a cupcake bake-off as part of a fundraising event for Ally’s Army. The event will be held at Alumni Field before the Wright State men’s soccer game.

All proceeds from soccer game tickets and the cupcake bake-off raffle tickets will go to better the lives of patients and their families that are facing a cancer diagnosis.

“Ally is happily cancer free, but one of her best friends, Caulin, was diagnosed with the same type of leukemia just over a year ago. So this year we are also supporting Caulin’s Crew,” said Gina Keucher, assistant director of student activities.

“Any member of the university community—staff, faculty or students—can participate in the bake-off,” said Keucher. “Each entrant brings decorated cupcakes to sample. Then the people that sample can vote for the best cupcake with raffle tickets.”

With the purchase of a ticket to the men’s soccer game, you receive five raffle tickets. Additional raffle tickets can be purchased to make sure your favorite cupcake wins the bake-off. All the raffle tickets are then put into a drawing for prizes donated by Walmart and the Barnes & Noble University Bookstore.

One of the primary goals of the Fraternity & Sorority Governing Council (FSGC) is to unify the community—philanthropy is one of the cornerstones of fraternity and sorority life. It offers students a way to connect to their community and have a direct impact on the lives of others. “

“The Ally’s Army fundraiser event is also a chance to talk about leukemia and lymphoma,” said Keucher. “With the help and support of the community, there is a great chance to fight and cure this particular form of cancer.”

According to Keucher, the planning and implementation of a philanthropy project such as the Ally’s Army fundraiser event offers a chance for the students involved to develop their own leadership skills.

“We also sponsored a cupcake cook-off at the 2011 Homecoming, and it was a big hit,” said Keucher. “Students have been asking when we would do it again, so this is a great opportunity to bring that back.”