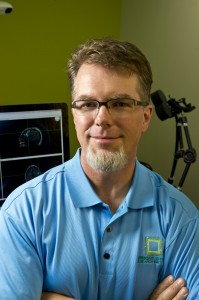 Prior to joining WSRI, Michael Weisend served as an assistant professor of translational neuroscience at The MIND Research Network in Albuquerque, New Mexico.

The Wright State Research Institute has hired renowned neuroscientist Michael Weisend, Ph.D., as a senior research scientist.  Weisend is a pioneer in the application of transcranial direct current stimulation (tDCS), which applies electricity to specific areas of the brain to enhance learning.

“We’re thrilled to have Mike join our team,” said WSRI Director Jason Parker, Ph.D. “His research is truly profound and has the potential to transform human performance and healthcare. He’s an excellent addition to the group of talented neuroscience researchers at Wright State and the Research Institute.”

Weisend’s research is characterized by a methodical approach to neuroscience, driven by math and engineering. His work in the area of tDCS uses functional imaging technologies such as magnetoencephalography to maximize the benefits the procedure.

In one study, Weisend’s team imaged the brains of individuals who were novices in a particular task. Then, the same individuals were trained to expert level at the task and their brains were reimaged. This identified the precise locations where electrical stimulation would have the greatest impact on cognitive function. The results of the study suggested that using tDCS in conjunction with neuroimaging could double an individual’s rate of learning.

“This methodology has tons and tons of applications beyond mere training,” said Weisend. “We could image the brains of people with dementia or ADD when they’re experiencing symptoms and again when they’re having an easier time to determine where to stimulate. It’s not a magic bean—it’s a process for studying how we can achieve different outcomes by stimulating in different locations.” 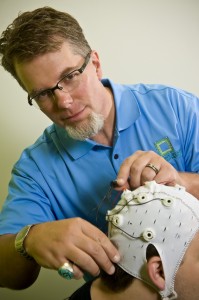 Weisend is a pioneer in the application of transcranial direct current stimulation (tDCS), which applies electricity to specific areas of the brain to enhance learning.

Weisend is nationally recognized for his expertise in the neurophysiology of learning, cognition, and memory. He has authored more than 50 scientific publications and has received grants and research contracts from the Air Force Research Laboratory (AFRL), the Defense Advanced Research Projects Agency (DARPA), and the National Institutes of Health (NIH), among others.

Weisend’s research transcends beyond the scientific community to the popular realm. He has been quoted in publications such as Newsweek, Business Week, The Chronicle of Higher Education, and Scientific American. He recently appeared on the Science Channel series Through the Wormhole with Morgan Freeman.

Born a Buckeye, Weisend is excited to return to his home state. He earned his bachelor’s degree in biology and psychology at Heidelberg College in Tiffin, Ohio, before going on to earn his master’s and doctorate in behavioral neuroscience at the University of New Mexico. Prior to joining WSRI, Weisend served as an assistant professor of translational neuroscience at The MIND Research Network in Albuquerque, New Mexico.