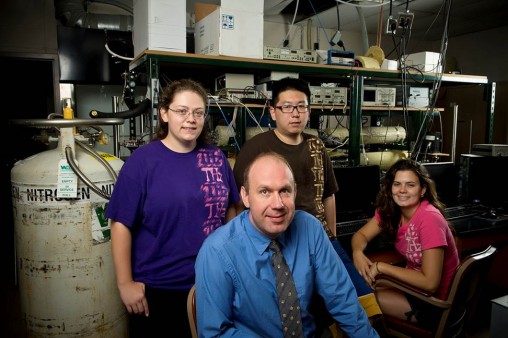 Diabetes, kidney disease, even cancer. Their presence in the human body can change the smell and chemistry of a person’s breath. So a Wright State University researcher and his team are building a novel breath-analysis device designed to detect these and other diseases.

“It will be a Breathalyzer on steroids,” said Ivan Medvedev, Ph.D., an assistant physics professor who is heading the effort. “This will allow us to have a warning of sorts. We are very excited about it. The technology is solid.”

Medvedev and his team of student researchers—Jessica R. Thomas, Tianle Guo and Daniela Branco—are working their magic in a basement lab at Fawcett Hall forested with equipment.

Medvedev’s plan is to use terahertz radiation to detect chemical changes in the human breath. Terahertz radiation consists of invisible light waves in the electromagnetic spectrum higher in frequency than microwave and lower than infrared light. It has been used for years by astronomers to detect molecules in interstellar space in an effort to determine how stars form.

Terahertz radiation has an advantage over other electromagnetic waves because it is so sensitive and produces very sharp spectra, making it easier to identify a wide variety of chemical molecules. Engineers have just recently developed somewhat simple terahertz radiation generators and detectors. In addition, computers have become powerful enough to handle all of the data created in the process.

“Technology is at the point where we can actually now detect those spectra and use them not for interstellar detection but for terrestrial applications,” Medvedev said.

Up until now, the standard technology for chemical analysis has been gas chromatography-mass spectroscopy, which fragments molecules with an electron beam. However, that technology has a limited number of detection channels and trouble analyzing complex mixtures.

“That’s where we come in,” said Medvedev. “We detect spectra and there are so many lines; the signatures are very unique. That is one of the biggest advantages.”

The goal is to come up with a non-invasive way of making an early diagnosis of a disease and minimizing its impact. The detector will be designed to identify and quantify chemicals in the breath such as the acetone, toluene and methanol associated with diabetes or the ammonia and urea linked to kidney disease or the sulfur-bearing compounds associated with liver cancer and cirrhosis.

One of the ambitious goals of the research is to tackle the detection of cancer, which is not likely to manifest itself with a single chemical in human breath.

“This technology will enable us to actually detect hundreds of chemicals simultaneously from a single exhalation,” Medvedev said. “The sensor will detect a variety of chemicals with very high accuracy of what’s in your breath. And then having established the baselines of those chemicals, you can actually draw conclusions about what disease that patient may have. We’re moving into something that nobody has done before.”

Medvedev and team are currently trying to determine what levels of the chemicals are normal in the human breath so they can detect elevated levels. Then the equipment must be miniaturized and made less expensive so it can be used commercially. Finally, it must undergo clinical testing on patients and others to see if it works. The whole process could take anywhere between five and 15 years.

Medvedev and his team have won a $100,000 share of a grant from Samsung for the research, with an opportunity to extend it for up to three years. The electronics giant is hoping to develop a compact, handheld device that will detect chemicals linked to diabetes. Wright State is collaborating with the University of Texas at Dallas, which has the technology to miniaturize the detectors and strong ties to the local medical community.

The technology may also be helpful in sniffing out pollution and detecting chemical attacks by terrorists.

“The military is also interested in this technology,” said Medvedev. “They would like to have an early warning of soldiers coming down with something before getting deployed. If you have a flu that has not yet expressed symptoms, you do not want to send a sick soldier to the battlefield.”

Medvedev’s paper on breath analysis was just accepted by Applied Physics Letters, a weekly peer-reviewed scientific journal published by the American Institute of Physics. The journal emphasizes new developments that lay the groundwork for fields that are rapidly evolving.

Medvedev grew up in Moscow, obtaining his master’s degree at the Moscow Institute of Physics and Technology. He earned his Ph.D. at The Ohio State University and stayed there for five years as a research scientist before landing a faculty position at Wright State three years ago.

“What we have here is a fairly extensive research cluster of terahertz scientists,” Medvedev said. “All of the infrastructure is here. It’s a very good environment for terahertz research.”