December Green, director of international studies at Wright State and known for her deep commitment to educating students on issues and cultures of foreign countries, was named recipient of the university’s 2013 International Education Award. 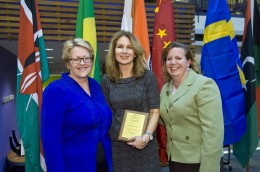 “Dr. Green has been instrumental in the development of international curriculum on our campus,” said Stephen Foster, associate vice president for international affairs.

Next summer Green will be taking students to London, Paris, Brussels and The Hague as part of teaching “Human Rights in Europe.” She has previously taken students on numerous overseas trips and taught as a visiting instructor at the University of the Basque Country in Spain.

“December reaches her students on a level that few other professors do,” said Laura Luehrmann, Ph.D., associate professor of political science. “Her passion ignites their hunger to respond to injustices before them and to dig more deeply to really understand countries, cultures and the peoples who navigate the personal and the political.”