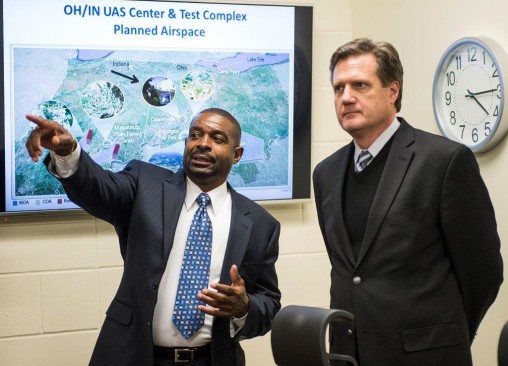 (L-R) Rufus Smith, director of the National Center for Medical Readiness at Calamityville, and Congressman Mike Turner during his tour of the facility.

The longtime Dayton-area lawmaker, chairman of the House Armed Services Tactical Air and Land Forces Subcommittee, received a tour of the facility and a briefing from officials on current programs and future plans.

Turner said Wright State has done an excellent job of keeping his office up to speed on developments at NCMR, from its conception, to its implementation and its successes.

“This is the first time I’ve been able to come on to the site and see the operations here,” Turner said. “It is certainly exciting to see both the construct and their future plans.”

The National Center for Medical Readiness provides medically oriented education and training for medical and non-medical civilian and military personnel.

And Turner said the operators of Calamityville are very forward-thinking.

“This is going to go from disaster training to working with the Department of Defense—the Air Force—on where does technology need to go in disaster response and how do we capture that for job development locally,” he said. “That’s impressive.”