An essay by David A. Petreman, professor of Spanish language and Latin American literature 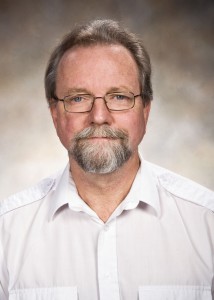 On Stefan Pugh’s office door is a plaque that reads “Brage Golding Distinguished Professor of Research,” a declaration not only of this professor’s remarkable accomplishments in the field of linguistics but a special tribute to a brilliant mind. Unfortunately, not enough people got to know and understand this man whose body and mind were savagely stolen from us by a hideous pancreatic cancer. Little does anyone know that somehow, all the while he was dying, he was teaching me how to live.

Shortly after Stefan was diagnosed, in December of 2012, with this dreaded, dreadful disease, he came to my office, closed the door, and proceeded to unload the truth. He was totally upbeat, said he had scheduled a meeting with an oncologist, and soon after aggressive chemotherapy treatments began.

This would be indicative of how he addressed the whole ordeal. He maintained his sense of humor, to which I easily related, ever since we first met five years ago. It seems to me that perhaps I took the news harder than other colleagues, since I had already lost a dear friend to the same damned disease 20 years ago. Of course, I can’t claim to know his private thoughts, feelings and fears, because he never showed his concerns in public. Unfortunately, I had a pretty good idea of what was in store for him.

The day after his first two sessions of chemo, I called him to remind him that his beloved Duke Blue Devils (he was a Duke University alumnus) basketball team was playing. He didn’t answer the phone with “hello”; he simply said, sense of humor intact, “I’ve got ’em on.” I must admit that I still get caught off guard, since I don’t have caller I.D. on my home phone.

I saw him a week later and his hair was really short. He said, “I started cutting it off for when it completely falls out, which should be within the next two weeks.” His face was gaunt and yellow. Really yellow. He told me that “it wasn’t enough to have pancreatic cancer, but now I’m jaundiced and I can’t have my next scheduled chemotherapy until they get to the bottom of this.”  His liver ducts were clogged and perhaps he needed a stent put in to let them drain. “Or,” he said, “the cancer has gone to my liver, which means good-bye world.” He added, “I hope I get a stent.” Before I left his office, we hugged, and he let out a kind of yell. I immediately pulled back, thinking that I had hurt him. But he was just expressing appreciation for the hug. Whew! No more handshakes. Just hugs.

In between chemo treatments, the man started working. He was reading grant proposals that a Canadian council wanted him to write reviews for. He continued research and writing on a book, which he was able to finish and sign a contract for, and he left behind a new article on East and West Slavic languages. I was thinking, “Are you kidding me?” Ah, yes, there was that “professor of research” thing.

He always felt better around the third day after the end of a chemo session. The members of the Modern Languages Department were even able to take him out for drinks then. In mid-February, I called him again to remind him of the always entertaining Duke–University of North Carolina game. He told me, “I told my daughter today that if I wasn’t watching the Duke game to call the hospital. I’d have to be dead not to see it.”

In March, I called him to see if he was “in” or “out” of my yearly NCAA Basketball Tournament Pool. He stated. “If I’m ever ‘out,’ you’ll know I’m on my deathbed. But that ain’t the case ahora.” (“now”, in Spanish.)

The next few months, there were many ups and downs: an emergency colonoscopy, internal bleeding, bad red cell counts, high fevers, in and out of the ICU, blood transfusions, simultaneous chemotherapy and radiation treatments. The tumor on his pancreas was slightly smaller, and the cancer had not spread. Stefan was happy about that.

On a Sunday afternoon in June, we met at The Pub at the Greene in Beavercreek. We had tried and tried for a convenient time to share a brew or two. Stefan’s wife Linda brought him in, and then left to run errands so that we could visit. He looked dapper in a sport coat and hat, with his cane. Other than a substantial loss of weight, he looked like a distinguished Scottish gentleman stopping in for a pint at his local pub.

We had two 20-ounce “pints” of Carlsberg beer. We talked a great deal, about the Modern Languages Department, about living and dying languages, about beer, and every now and then we punctuated our conversation with some typical Three Stooges sounds, along with our comments about what a pity it is that some people just can’t understand their comic genius. This was one of our best moments, which I will forever treasure. There was even a bonus: Ibrahim, a friend of mine from Lebanon, walked by. Ibrahim, who speaks Arabic and English, is also fluent in French and Polish, since he lived for several years in France and Poland. I enjoyed it immensely when the two of them were gabbing in Polish. Stefan so easily moved in between languages. Of course, we all do that in the Modern Languages Department, but not with so many languages. The man had a working knowledge in some 19 languages, with a certain degree of fluency in many of them. Imagine the millions more people he could communicate with than most of us.

At the end of September, I got the phone call. Stefan was in Hospice. My heart sank. I made arrangements with Linda to see him, and on October 1st I drove there, with some trepidation, but I was also anxious to see him. I look back now, and I realize that what I saw and heard was amazing. The first thing out of Stefan’s mouth was, “How’s life treating you?” I was thinking, “After the way life is treating you, Stefan, how can you possibly be worried about how it’s treating me?” He was genuinely concerned about my welfare. He was extremely talkative, and upbeat. Still thinking about work, he stated: “I’m not going to start on a new project,” followed shortly by, “I know this is the end.” My heart sank another level.

He was somewhat restless. He kept pushing the buttons on his bed, trying to move into another position. His hands moved constantly, his legs occasionally. Finally he said, “Priorities change. All I want to do is move my legs over to the side of the bed and stand up. We forget, when everything’s working, how lucky we are.” Somehow, I felt that he was trying to teach me a life lesson. I actually felt a bit guilty.

He continued to be worried about others. He spoke about his aged parents and their health problems. During his fight for his life, he traveled several times to Washington, D.C., to visit them. Never a word about his own condition. How magnanimous.

At one point he needed a break. He told me, “Sometimes I fade in and out of consciousness, so if I fade out, no offense intended.”

He praised Linda, for all of her loving care. “I don’t know where she gets all the energy.” Then suddenly he said, “I hope you didn’t think this was the ‘Grand Performance.’”

Conscious of not speaking clearly, he tried to explain: “I know what I’m trying to say, and I think you know what I’m trying to say, but with these drugs I just can’t say it.” I couldn’t resist. I had to quote one of Curly’s (Three Stooges) most famous lines, in his typical falsetto voice: “I tried to think, but nothing happened!” We both laughed and laughed. It felt great to laugh with him again.

After a while, he drifted away—to his past. Something that will always haunt me. He mentioned a certain Maribel Santero, a fourth grade classmate who was the daughter of the Ecuadorian ambassador. It was when he was living in Ecuador, as his father was a diplomat. It’s funny how our minds never function chronologically. On any given day, we delve into the present, the past, and future, back and forth. What was it about Maribel that stuck with him? Did he have a “puppy love” crush on her? Was she the most interesting person in his class? Was she quirky? Was Stefan’s life beginning to flash before his eyes?

Ever the intellect, he said: “Sometimes I’m drunk, and now I’m on drugs, but you know, sometimes you just want to talk about ideas.”

Stefan Pugh was most definitely a man of ideas. And he wanted to exchange those ideas with friends and acquaintances. In that way he reminded me of my Chilean friends. They enjoy drinking, but the conversations are always about serious issues: literature, language, politics, social themes, philosophy.

I didn’t know it then, but October 1st would be our last conversation. I saw him again on the 7th, but he mostly slept. As he lay there, his face now extremely gaunt, his bones sticking through his skin, his hair greying by the minute, his hands constantly twitching (was he writing another book?), I couldn’t help but think of a dying Alonso Quijano (Don Quijote), his dream of righting the injustices of the world gone, just waiting to take a final breath.

When Linda described to me the moment he died, she said he went very peacefully. She watched him take a breath, and then he didn’t. Chilean poet Jorge Teillier says it in a poem about life, after saying good-bye to his paper and pens, his friends, a girl, memory, nostalgia, and his poems—“Words” he says, “that hide perhaps the only truth: Respiramos y dejamos de respirar.” We breathe and we stop breathing. Sometimes that’s all there is to it.

Our Modern Languages Department, the Wright State University community and really, the entire world, has lost a brilliant mind. I have lost a friend. I miss him, and will continue to do so. He fought his sickness with great bravery and good humor. Perhaps unknowingly, he left behind some good advice on how to live while you still have life. Thank you, Stefan.