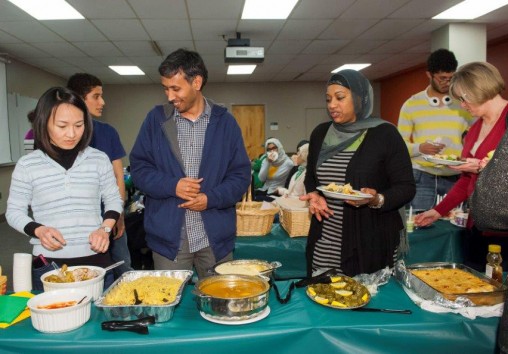 LEAP International Food Day gave students a chance to sharpen their English skills while sampling delicacies from around the world.

There were shawarmas, Middle Eastern sandwiches of shaved meat. There was basbousa, a honey-soaked semolina cake. There were stuffed grape leaves, pork dumplings from China and lemon mousse from Brazil.

“The students in Level 2 have been studying food and how different cultures relate to food and cooking,” said Jeannette Horwitz, director of the LEAP program. “Students work in groups to prepare dishes from their countries and then share them.”

About 40 students from Saudi Arabia, Kuwait, Brazil, China, France, Iraq and the United States took part in the culinary event.

There was kabsa, a Middle Eastern chicken and rice dish; a dessert-like jam made of dates; and brigadeiro, homemade chocolates from Brazil.

To mark the national day of Kuwait—which just celebrated its 53rd anniversary of independence—a student brought a dish topped with red peppers, green cucumbers and black olives to resemble the Kuwaiti flag.

The primary purpose of International Food Day is to give students the opportunity to speak English before a large group by presenting their dishes. There were 15 different presentations.

“Students learn about using imperative sentences to give directions,” said Chris Sitko, a LEAP instructor. “So they give a recipe with ingredients, and then they will show the steps to make the dish.”

The LEAP program provides full-time English instruction and helps non-native speakers develop the linguistic, academic and social skills they need to be successful at a university in the United States. There are currently about 170 students in the program, up from roughly 25 in 2002.