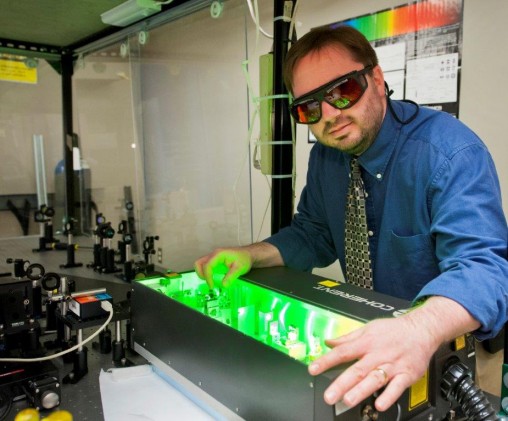 Jason Deibel, an expert on the use of lasers to study new materials, was named director of undergraduate research and experiential learning in the College of Science and Mathematics.

When he was 10 years old, Jason Deibel built a laser in the basement of his Kentucky home. Or tried. Using Legos, batteries, paper clips, electrical tape and a flashlight, he constructed a contraption he hoped would produce a lightsaber. What it produced were a lot of sparks.

“My parents and I then had a discussion about proper ways to learn about science,” Deibel recalled with a smile.

Today, the associate professor of physics at Wright State University is one of the foremost experts on the use of lasers to study new materials.

He has built a laser lab at the university, using terahertz imaging to do everything from materials work for the Air Force to examining paintings in hopes of uncovering rare works of art. And much of the work has been done with the help of undergraduate researchers.

“I wanted to build a lab that could work with undergraduates,” he said. “I designed projects that they could do.” 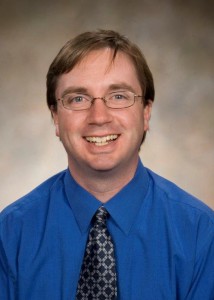 Jason Deibel joined the physics faculty at Wright State in 2007.

“At the end of the day, what we’re trying to do is advance the undergraduate experience for science and math majors at Wright State and better prepare them for careers down the road,” said Deibel, Ph.D. “It’s a more comprehensive experience—where not only are you learning, you are applying that knowledge.”

In his new position, Deibel will first assess who at the college has been actively sponsoring undergraduate research in the past three years. He wants to get more faculty developing research projects for the students, mentor both students and faculty, set goals, track the research and integrate it into the classroom experience.

“I want to find out what’s working, what’s not, and what resources we need to get for this—and also start celebrating this more,” he said.

Deibel envisions an undergraduate research website with an extensive slideshow that will attract prospective students. And he hopes the overall effort will improve the retention of students studying in the STEM disciplines.

Mark Mamrack, Ph.D., associate professor, associate dean of research and graduate education and chair of the committee, said the college will benefit from Deibel’s experience in mentoring students on research.

“He is a true believer in the power of undergraduate research and brings that viewpoint to the position,” added Kathrin Engisch, Ph.D., associate dean for undergraduate education and outreach and associate professor. “I am confident he will use his extensive talents to realize our dream—every undergraduate in our college involved in some kind of real-world experience before they graduate.”

Deibel’s path to becoming a champion of undergraduate research began when he was an undergrad at Transylvania University in Lexington, Ky., and won a summer internship and the opportunity to do research at the University of Michigan’s Center for Ultrafast Optical Science. When he later was working on his doctorate in applied physics at Michigan, he was able to supervise undergraduate research. And he did it again as a post-doc at Rice University, using lasers and optics in an unclassified CIA research program.

“I knew how valuable undergraduate research was to me and also realized there could always be students on the cusp of not knowing what they want to do,” he said. “Some people don’t learn in a classroom setting; they learn by applying.”

Deibel joined the faculty at Wright State in 2007.

“It is a great blend of teaching and research here,” he said. “And in my own research field, there was a lot of opportunity to work with the Air Force Research Lab.”

And he also gets to play art detective.

An art specialist from California recently contacted Deibel about an oil painting with a signature that was unrecognizable, but was suspected of being done by Jackson Pollock, a major figure in the abstract expressionist movement known for his unique style of drip painting.

The painting had been sent to art experts around the world and even been X-rayed, but the identity of the painter remained elusive. So Deibel took it to his laser lab, examined it with terahertz imaging and found a practice sketch under the painting, something unlikely to come from Pollock.

“If you know anything at all about Jackson Pollock,” Deibel said, “he was not a man who practiced.”